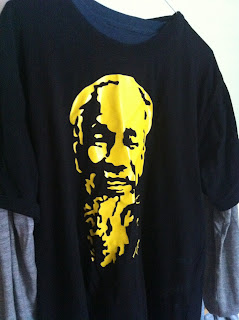 I was wearing my Ho Chi Minh t-shirt last weekend.

I searched long and hard for this when we were in Vietnam during the August of 2010.  Clearly t-shirts of Uncle Ho are as common as muck and as cheap as chips over there, but I was looking for something a little out of the ordinary... well, and something that might last me a little longer than the first wash.

In the end, I stumbled across exactly what I was looking for in a small shop called "Papaya' down by the river in Hoi An.  It wasn't the cheapest by any means, but the t-shirts seemed to be a very high quality and - best of all - they were fair trade.

"Purchasing a papaya t-shirt you can be sure to help and also be involve in the building process of an equitable system where both, the worker earns a living wage so he can provide for his family’s daily needs, and you, the consumer can be sure of having purchased a quality product that will bring satisfaction and that he has done a good deed.
Our Policy: No children labour freedom of association safe and good working conditions reasonable salaries and benefits sharing reasonable working hours equal opportunities employment security respectful treatment of employees".

The label "Made in Vietnam" is used here as a badge of quality.

I wear my Uncle Ho t-shirt with pride: he's an iconic figure and it was a fantastic trip to a beautiful country (plus it's WORTHY, too... what's not to like?).  The great man only appears on the t-shirt in silhouette, but the guy in our local picture framing shop recognised it immediately on Saturday and commented approvingly.  Well, I suppose he would: he's both exactly the right sort of age to identify such an iconic figure AND he framed the Vietnamese publicity posters that we brought back with us (including one of Uncle Ho).  Hmm.   Now I think of it, he's also just framed a North Korean propaganda poster advertising an art exhibition in Vienna that we went to).  Yeah, so I guess he had some context.  But still....

A little later on, I was enjoying a beer in the bar at the Broadway cinema when someone else approached me about the t-shirt.  Now, the Broadway is the art-house cinema in town, and it has a pretty good bar: if you can find hipsters anywhere in Nottingham, you can find them here.

"Excuse me"
"Yes?"
"Do you mind if I ask you who that is on your t-shirt?"
I summoned my most nonchalant look and replied, "It's Ho Chi Minh"
"Ah."
Pause.
"...that was a great episode of Top Gear, wasn't it?"
He then went into what I assume was a Jeremy Clarkson impersonation, making some remark about how they'd now made it further north than the Americans, but by now I'd looked away disdainfully.  To be honest, I was a little embarrassed on his behalf.

Seriously.  I bet he wasn't there to watch a subtitled film either*