I still remember every whispered word....

Well, obviously this is here because of the Olympics in general and because I saw the Olympic Torch passing over the River Trent.... but it's being used pretty widely to trail the Games everywhere.  Good job no one's really paid much attention to the lyrics, eh?  Just focus on the overview and don't think too hard about the boiling urban discontent and violent imagery and it'll be fine.  Still, it may only be superficially relevant as a theme tune for the London Olympics... but it's still a damn fine song, and is welcome in my head anytime.

I had this song on one of the playlists we listened to a lot whilst we were travelling in 2010.  I'm pretty sure we played it to death in our camper vans in Australia and New Zealand, but where I remember it best was heading along the highway towards Jasper after we'd come off the Northern Passage ferry in the Rockies in Canada... where we saw our first bear in the wild, actually... a rangy little thing grazing on the side of the road 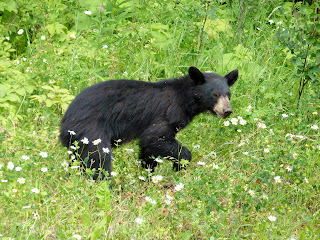 cute little guy, huh?  That was a damn good trip.  Apart from anything else, that year made me realise that I've got a pretty long way to go before I've been everywhere.

“Write This Down” – Maximo Park

I'm supposed to have spent this week listening to the two albums that I'm meant to be reviewing by Saturday evening.  I have been listening to them, too... it's just that I keep going back to the latest Maximo Park album.  Like much of their stuff, it's a combination of Paul Smith's Geordie accent and references to filthy geek sex.   This song being no different, I think.  Good band, but Tribute to Nordberg and Captain Dangerous (and a deadline) are calling me.

I haven't seen either of these adverts this week, so it seems a little unfair that both of these annoyingly catchy little jingles are in my head.  Autoglass is bad enough, but Haribo just annoys me.  When did it become the all conquering sweet anyway?  I'm pretty sure it didn't exist to any great extent when I was growing up, and now it's bloody everywhere.  It's not even as though they're really all that nice.  They might be addictive, but that's not the same thing at all.  Pah!  Also, the happy world of Haribo as depicted in the adverts looks a little creepy to me.

The birthday present that keeps on giving.  I actually saw them on the MTV music awards (don't ask how I ended up watching that as I'm not really sure).  They were performing with Johnny Depp.  Yeah.  Amidst all the relentless product placement and recognition of distinctly sub-standard films, this was a welcome interlude.  I'm not sure what Depp added to the song, but if it was down to him that the band were on in the first place, then I'm grateful for that much at least.

Ridiculous and brilliant.  Never mind the Anchorman scene, I just love the idea of a song about having sex in the afternoon.  They really don't write songs like this any more.  Check them out in the video too.  Oh me, oh my.  They don't make them like that anymore either.

Always reminds me of a rainy morning in front of the Pyramid Stage at Glastonbury in 2002, but I love this record.  It makes me slightly emotional, actually.  I'm not sure why, but it makes the hairs on the back of my neck stand up when I hear it.

One of the albums I'm reviewing for Leftlion features this song; it tells the story - seemingly first-hand - of the relationship between Tommy Lee and Heather Locklear.  It's not exactly presented for easy laughs, either and is taken pretty straight as the story of a failing relationship.  I like it.  Have a listen for youself.  Notts rock FTW!

Sorry about this, but the news of the Spice Girls musical had the even more unwelcome side-effect of triggering this song into my subconscious.  Awful sickly sweet song with accompanying awful, twee video.  Hats off, mind you, to the journalist I heard on the radio who asked the co-creator this question: "You reportedly made £90m from the success of Mama Mia.  What was it that attracted you to writing a Spice Girls musical?".  Now that's right up there with the question Mrs. Merton put to Debbie McGee: "What was it that first attracted you to millionaire Paul Daniels?".  Didn't the Spice Girls cause enough damage - earworm or otherwise - back in the day?  Why this? It's not fair.