london calling, yes I was there too.... 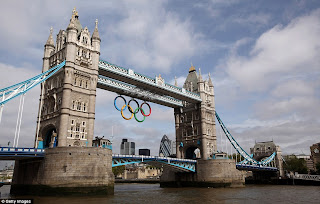 Lots of people seem to think that I'm cynical.  Maybe they're right, but when it comes to the 2012 Olympics, I've been right on board from the moment that they announced that the Games were coming to London.  Well, to be honest, I would have been onboard anyway.  I love the Olympics wherever they are and I spent two brilliant weeks in Athens in 2004 watching some incredible sport that I will never forget.  If Paris had won the games, I'd be more than happy to spend a couple of weeks on the other side of the channel (and I bet it would have been easier to get tickets too).  But the games are coming to London, and given that we have never been awarded the games in our own right, that's pretty special.

The carping started almost immediately, of course... the games will cost too much, the tickets will be too expensive and too hard to get, the sponsors are too heavily involved and getting too many tickets.  Blah, blah, blah.

Beneath it all, though, I think people have been pretty excited.  All that moaning about the ticketing system was really just a very British way of showing how much everyone wanted a piece of the games and what a great sense of ownership we seemed to feel for OUR Olympics.  I would have loved to have seen some rowing, some swimming, some cycling and perhaps a bit more athletics, but I've got tickets to things like the hockey, the 53kg Women's weightlifting, handball, table tennis, volleyball, fencing, archery, taekwondo, a morning in the main stadium.  It's going to be great (and I'm going to watch some Paralympics too, which I think might be even better).

Ever since the Olympic flame arrived in the UK, there's been a lot of excitement and media coverage of the torch relay.  Apparently the flame will pass within a couple of miles of the homes of the vast majority of people living in this country, and today the flame passed through West Bridgford on the way into Nottingham.. within half a mile of my house.

My immediate reaction was one of mild annoyance: roads were being closed at around 4pm, and it looked like I might be trapped in my office until really late.  But, you know, how often does something like this happen?  How could I possibly be so curmudgeonly as to begrudge people the chance to see the Olympic Torch Procession at a time when schools would be out and kids could go along and see this once-in-a-lifetime event for themselves.

...plus I decided to just leave work at 3pm. 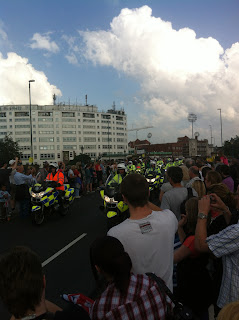 The weather has been pretty stormy all day, but right on cue, the sun came out.  I went out for a run at around 5pm, and it was really heart-warming to see that thousands and thousands of people - mostly kids - were making their way towards Trent Bridge and the Embankment to get a good slot to watch the procession.  On a whim, about 3/4 of the way through my run, I stopped to join them and to watch the torch go past for myself. 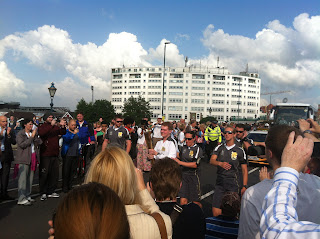 We had to wait a little while, but the atmosphere was really good, with people smiling and waving their flags.  It was good.  Heart-warming, either.  Soon enough a convoy of the sponsors came past - Coca Cola, Samsung, Lloyds bank - but then a phalanx of police motorbike riders, a few coaches and finally the torch itself, carried by a young blind guy by the name of Matt. 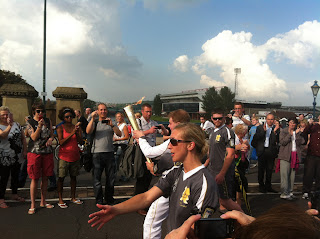 Do you know what?  It was properly inspiring.  Lots of people will be watching Torvill and Dean with the torch in Nottingham town centre tonight, but I'm really glad that I got to see Matt carrying the torch.  I had a lump in my throat and everything as the crowds cheered him past.

I think the London Olympics are going to be okay.
Posted by swisslet at 19:33