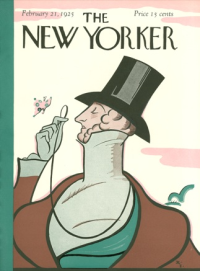 A couple of months ago, I finally discovered a really good use for my iPad.

I've had it for about a year now, since my generous wife brought it back for me from her business trip to the USA. Oh sure, I've used it for all the obvious stuff: browsing websites, playing Angry Birds, reading my email and all that jazz, but I hadn't found the thing that made it really indispensable (although I did very much enjoy watching Jaws sitting next to a mesmerised seven year-old on a flight back from Paris).

Then I subscribed to the New Yorker.

I like the New Yorker. I like the idea of the New Yorker. Every time I've been in the Big Apple, I've picked up a copy, read it from cover to cover and then toyed with the idea of subscribing... only to look into it and realise it's a very expensive and impractical way of getting hold of a weekly periodical.  Given that it's such an obvious idea, it took me a really long time to realise that the iPad might be my answer: one £29 subscription later and I was on my way.

It's a bit of a challenge to find the time to work my way through all the content every week, but it's fantastically stimulating with an array of wide-ranging articles. I've read fascinating articles on some diverse subjects: an in-depth profile of a Mormon Innovation consultant; the story of the hapless American drifter who found his niche in Cuba and ended up as a commandante in Castro's revolutionary army; a detailed analysis of the stunning Republican U-turn over the individual mandate; a look at some of the climate change reversal theories scientists are working on (big stirrers to lift the colder water from the bottom of the ocean to absorb more carbon dioxide from the atmosphere than the warmer water that was above it, anyone?); a brilliant, in-depth review of Mark Ruffalo's performance in the Avengers movie by FILM CRITIC HULK; a terrifying interview with the Tupelo evangelist and broadcaster who is both staggeringly arrogant and staggeringly ignorant - Hitler as a homosexual socialist with an army of gay Storm Troopers who would obey his orders far more readily than heterosexuals, for instance - quite why he thought he'd come out looking good from a profile in the New Yorker, I have no idea... the writing is uniformly pretty good, but the sheer breadth of stuff here is amazing.

Slightly to my surprise, I find that I like the fiction - every issue contains a short story - the best. It's not always to my taste, but it's never boring and several times has almost inspired me to write something myself. Yeah. So it's a great read and I've enjoyed very much making the time to read it every week, putting down my iPad feeling slightly better informed than when I picked it up... which isn't really true when I've been playing Angry Birds. I've even put an entry into the famous cartoon caption competition (my caption, incidentally, far better than any of the winners. Maybe these wise-ass New Yorkers just don't get my sophisticated British humour?)

I truly didn't think that it was possible, but it seems that I really have found a way to make myself an even duller conversationalist....
Posted by swisslet at 18:57