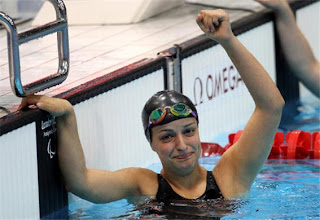 I promise I'm not going to go on about the Paralympics forever.... but one more story has touched me this week.  If you're British, then you'll probably know all about the amazing Ellie Simmonds. You might even remember that during the games, Ellie battled for most of her medals against the American swimmer, Victoria Arlen.  Simmonds beat Arlen into silver in the S6 400m freestyle, but then got a bronze to Arlen's silver in the S6 50m and came second to the American in the S6 100m.  Great races all.

Both are clearly incredible athletes, but I was struck especially by Arlen's story.  I was lucky enough to see both of them swim in the heats for the 400m at the Aquatic Centre at the London Olympic Park the other week, and I was struck by how physically different these athletes are.  Simmonds, of course, has achondroplasia, but the quirks of Paralympic classification means that she competes in the same races as the much taller Arlen... although Arlen does not have the use of her legs.  What I didn't realise though was what had caused Arlen's disability.  It turns out that Arlen developed transverse myelitis at the age of 11 and was left in a coma for 2 years.

Now, this obviously caught my attention because this is exactly what I was initially diagnosed with in 2005 and was my holding position until I was eventually diagnosed with multiple sclerosis in 2009.  For me, it only gave me numbness, loss of sensation and muscle weakness - still my main symptoms - but it gave me a bit of a jolt to read about how the same thing had affected someone else so dramatically and in such a life-changing way.

When she awoke from her coma, as well as losing an unimaginably large part of her young life, she no longer had the use of either her arms or her legs.  She only started swimming some 18 months ago as part of her rehabilitation, and gradually regained the use of her arms.  The fact that she's able to swim at all seems remarkable to me, never mind that she can swim fast enough to set world records and win medals at the Paralympic Games.

She's seventeen years old.  Can you imagine the fortitude it took her to reach this point and the obstacles she's had to overcome to get here?

"One of the things I find in having a physical disability is that people tend to treat you differently. But in reality, people that have disabilities are not much different from those who don’t. It’s just that our obstacles are obvious!

Not having the use of my legs has made things challenging, but what I have gone through has taught me perseverance and patience. Obstacles are obstacles-whether it’s a wheelchair or any other circumstance that stands between you and your dream.

My message to all that will hear it, is don’t let your limitations define you…my wheelchair does not define me. Don’t focus on what you don’t have…use what you do have.

I may not be able to use my legs, but my arms are strong enough to break four World Records in the sport of Swimming. Above all, don’t ever lose hope.
If you must, readjust your goals."

I know it's only one remarkable story amongst so many others, but this one is kind of close to home and really makes me think how lucky I am.

Email ThisBlogThis!Share to TwitterShare to FacebookShare to Pinterest
Labels: more important than that, sport, WTs