sleep with one eye open... 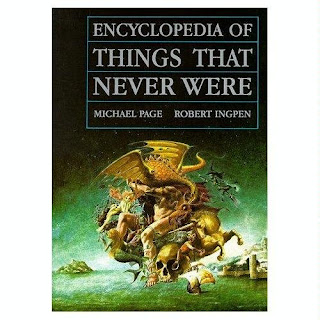 In case you haven't noticed, I'm on something of a fairy tale kick at the moment.  Growing up, one of my favourite books in the whole world was "The Encyclopedia of Things That Never Were" (by Michael Page and Robert Ingpen).  I've been reading it again, my much-loved edition slightly battered and inscribed on the title page with a dedication of love from my parents dated "Christmas 1985".  I was eleven years old, and I was both mesmerised and slightly scared by some of the entries: Lilith creeping into your room at night, wendigos, red caps, banshees, kobolds.... I can't think of another book I have owned that has played quite such a large role in firing my imagination.  As I start to search around now to discover what I want to write about, I find myself coming back, time and time again, to the idea of writing something fantastical.

Perhaps - now that I think about it - not entirely coincidentally, I have also been dipping into my edition of the "Children's and Household Tales" by the Brothers Grimm.  I was both delighted and slightly horrified to discover yesterday morning that Philip Pullman has just published a book featuring his (faithful) retellings of fifty of his favourite Grimm stories: delighted because I love his writing and I very much want to read this book, but horrified because I'm just shaping ideas to write in this direction myself.  These folk tales are as old as the hills, of course, so they're hardly likely to become old hat now... but even so.  I nearly downloaded the book to my Kindle this morning, but read that the hardback edition is beautifully bound, and in honour of my much-loved old encyclopedia, I've bought that instead.  I think I might re-read the Angela Carter re-tellings too, whilst I'm at it.

As I was looking for reviews of Pullman's book online, I found this quote, taken from a piece he wrote last Friday for the Guardian on the challenge of re-telling the Grimm fairy tales:

"The fairy tale is in a perpetual state of becoming and alteration. To keep to one version or one translation alone is to put a robin redbreast in a cage. A fairy tale is not a text."

Email ThisBlogThis!Share to TwitterShare to FacebookShare to Pinterest
Labels: books, looks like we got ourselves a reader, writing