droplets of yes and no in an ocean of maybe....

It's the Robin Hood half marathon this Sunday.  The bulk of the training is now done and I've just got one gentle two-miler tomorrow between me and the race.  Of course, I'm doing my best - as always - to sabotage myself: my taper began on Monday with a "gentle" 4-miler where I managed to twist my ankle.  It seems to be alright, but I was a little worried for a minute there.  Meanwhile, the tendon in my left foot has now stiffened up so much that I've literally been hobbling around everywhere, especially in the mornings.  I'm not actually too worried about this, as the act of running stretches the tendon out and the pain eases off after the first mile or so.  And I'll be taking a shit-pile of drugs before I run, too.  Worse yet, in spite of not exercising for a couple of days, I woke up tired this morning and have felt the gradual, insidious creep of MS fatigue across my shoulders and arms all day.  Experience tells me that I'll probably have shaken this off by the weekend, but the prospect of 13.1 miles is really starting to loom in front of me.

Still, the race itself is only the final piece of a larger and more satisfying challenge.

In the last three months, since the beginning of July, I have run the grand total of 194.24 miles (in 36 separate activities, so that's about 5.4 miles each time, on average).    Before that, I was stuck in a bit of rut, running 3.25 miles twice a week at lunchtime from work, and one other run of about 4.25 miles on a Saturday morning.   I was running the same routes all the time at more or less the same pace.  I was cruising and wasn't pushing myself hard enough.  I joined running club at around about the beginning of July, and since then I have definitely been encouraged to run further and faster than I would have done on my own.  I haven't followed a specific half-marathon training programme this year - and indeed, I didn't even admit to myself that I was going to run one at all until a couple of weeks ago - but I'm pretty sure that I've worked harder than I did last year when I thought I trained pretty hard.  Whether or not this will show in my time on Sunday remains to be seen.

I'm trying hard to pretend that I don't have a target time in mind, and I'll just see how I feel (and more importantly, how the tendon in my foot feels) on the day.  The reality is that if I don't break 2 hours, I'll probably be a little bit disappointed.  Well, the weather might be horrible anyway, so who knows.

Given that I wasn't planning to run at all, and I only set up the JustGiving page a few weeks ago, I'm really pleased that I've raised £619 for Macmillan so far, with a further £140 promised, £152 in Gift Aid and another £500 from my company as part of their fund matching scheme.  That's going to pull in a grand total of around £1500, and that makes it all feel really worthwhile.

Just to put that into context:

It's a great charity and you can still sponsor me here.  Thank you so much to everyone who has already contributed.  As always, you floor me with your generosity.

One little run to go before race day.  Given that it was on this run last year that I managed to strain a muscle in my buttock, I will definitely be trying to take things easy this year.....

After all, I'm a thoroughbred athlete. 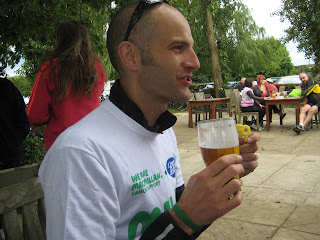