find yourself a girl and settle down.... 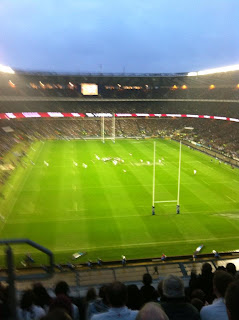 the view from our seats...

I was at the rugby at Twickenham on Saturday. It was a pretty good day, in spite of the weather and in spite of South Africa inflicting a deserved defeat on a rather uninspiring England side, albeit by a solitary point. It’s a grand stadium alright, even if it is in one of the coldest, most inconvenient places in the world to get to and is filled with the kind of person who wears full-length Driza-Bone rain coats and either mustard or raspberry coloured cords.

My mate and I sat in the “cheap” (£56) seats up at the top of the South Stand, but a friend of ours was hosting a hospitality box in the ground and he was kind enough to invite us in for a couple of drinks after the game. There’s a hotel at the ground, and the box was set up in one of the rooms there, with a balcony overlooking the pitch itself. The box apparently cost something like £8000, and the guests were treated to a sit down meal, table service as much booze as they could drink and a prime view of the game from the balcony (although, actually I think we got a better view from our seats). On top of that, my friend’s company had the use of the bed in the room for the Friday and the Saturday night. Quite the set up.

By the time we got there, a few people had already left, on their way to another bout of hospitality at the Robbie Williams gig at the O2. Those who remained were also starting to show the wear and tear of a busy day on the sauce. What struck me most, to be honest, was how young most of the guys there were: in their late 20s, I reckon. As we tucked into a glass or two or red wine, and some cheese and port, I chatted to one of these guys. He was a bit pie-eyed, but rather than perhaps discussing the short-comings of the England back line, he was most interested in talking to me about how difficult he was finding it to meet women. Not women, per se, you understand, but a keeper… someone he might have a decent relationship with. He was on Match.com, of course, but he was finding it a bit difficult as people aren’t always everything they promise in their profile:

I’ve got to be honest, it wasn’t really the conversation I was expecting to have after a major Rugby international, but it did give me a flashing insight into the difficult life of today’s high-flying young executives, as they sit weeping into their complimentary meal at a Rugby International match.

…as did the fact that these guys had been in that room since about noon, and by the time I popped into the bathroom a little after half five, none of the packets of soap or hand gel had been opened until I opened one to wash my hands.  Make of that what you will.