Do you ever think that you can guess someone’s nationality just by looking at them? I’m not talking about their race or anything totally obvious like that, I’m just thinking that it sometimes feels as though you can tell just by looking at someone, by the general cut of their jib. Clothes are a bit of a marker, of course, but it’s more than just the clothes you wear. To me, Americans are kind of big and wholesome looking, with Canadians a taller, even more wholesome version of the same thing; Australians are somehow brash looking and Kiwis are somehow more understated and wry. Grotesque generalisations, obviously… but do you know what I mean?

Is it possible that our cultural heritage is something we unconsciously carry with us as a visible marker of where we’ve come from?

The Brits are pretty easy to pick, I think – not least because we’re so often covered in tattoos displaying the badge of our national football team or spelling out ENGLAND in big, fat letters on the inside of our forearms. And we’re always queuing. And complaining (to each other… NEVER to the person who has upset us). And apologising.

I remember when we were wandering around the Jemaa el-Fnaa in Marrakech a few years back. If you’ve ever been there, you’ll know that this is a smoky, crowded Souk packed full of Moroccan traders trying to sell you something. Of course, to the passing tourist, many of the stalls look exactly the same and seem to be selling more or less the same merchandise. The traders combat this by vying to catch your attention so they can lure you in to their shop. They do this by calling out to you as you pass by, trying to guess your nationality and calling out to you in what they think is likely to be your language. Tourists are easy money, after all. For some reason, they seemed to find me hard to pick and tried pretty much every language they could think of: English, French, German… eventually just listing out the countries that popped into their heads: Aussie? American? Dutch? Swedish? in the end, they seemed to decide that I must be Scandinavian. It was probably something to do with being tall and thin and not answering them when they spoke to me in any of the languages they tried, but I remember being childishly pleased that they hadn’t picked me as English. I’m not especially ashamed of being English, or of the English themselves – we’ve got as much good and bad as any other nation - but I just don’t see my nationality as being anything I want to be defined by. I am English, but I don’t care to be pigeon-holed by anyone’s idea of what that might mean.

C. used to occasionally remark that I don’t really look English, although I’ve never really been able to decide if that’s really true. Or, if it is true, then why is it true? Why? It’s not just because I don’t have terrible sunburn and “FOOTY MAD” tattooed into the nape of my neck, is it? (personally, I'd go with 'footie' as my spelling of that, but then I wouldn't have it done at all, so each to their own....)

Actually, I don’t like the idea of being pigeon-holed at all. Full stop. By nationality or by anything else. In my own mind, I like to think that I’m an enigma. You might disagree, but that’s just because you don’t understand me. No one understands me. No one ever really could.

Still, if I had to be guessed as a nationality, I suppose I could do worse than something Scandinavian. Tall, windswept and mysterious. Possibly soundtracked by a-ha. I could live with that, I reckon. 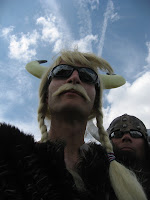 I could so rock one of Sarah Lund’s jumpers too….
Posted by swisslet at 19:52