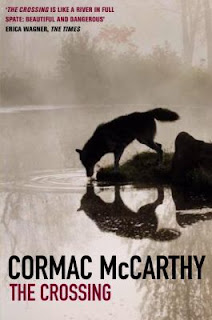 I'm two-thirds of the way through Cormac McCarthy's Border Trilogy.  I started reading "All The Pretty Horses" when we were in Lanzarote and rolled straight from that into "The Crossing".  Needless to say, I've been enjoying them very much.

I actually got a copy of "All The Pretty Horses" free with a GQ or some other magazine way back when I was a student in about 1995.  It was very highly regarded, and I always meant to read it, but somehow never quite got around to it.  I think I was put off by the description on the back of the cover about a love affair.  A few years later, the trailers for the Matt Damon film of the novel made in 2000 put me off somewhat as well.  I mean, Matt Damon.

Later on, I read and very much enjoyed "The Road" and "There Will Be Blood" but still never quite pulled my finger out to read that old paperback.  Still, I got there in the end.  I actually bought a nice hardback anthology of all three books and took that on holiday.  That did the trick.  It turns out - eighteen years after I first picked up a copy of the book -  that "All The Pretty Horses" isn't chick lit at all and is actually an excellent read.  Ah well, you live and learn.

Both the novels I've read so far, "All The Pretty Horses" and "The Crossing", tell similar stories; of journeys by young men across the US border and into Mexico either just before or just after the Second World War.  The old west is dying and the both books describe the flickering embers of the pieces that still remain.  McCarthy's style is clipped and sparse, but the prose is frequently staggeringly good.  "The Crossing" in part deals with a young man's journey to lead a wild wolf over the mountains and into Mexico.  Here's McCarthy describing a scene around the boy's campfire as he watches the wolf:

“When the flames came up her eyes burned out there like gatelamps to another world. A world burning on the shore of an unknowable void. A world construed out of blood and blood's alcahest and blood in its core and in its integument because it was nothing save blood had power to resonate against that void which threatened hourly to devour it. He wrapped himself in the blanket and watched her. When those eyes and the nation to which they stood witness were gone at last with their dignity back into their origins there would perhaps be other fires and other witnesses and other worlds otherwise beheld. But they would not be this one.”

In truth, I found the second half of "The Crossing" slightly heavy going: the main thrust of the plot is overtaken by a series of vignettes, and beautiful though the writing is, it does drag a little bit after that amazing opening with the wolf.  It's almost picaresque in places, and we meet a gallery of grotesques: feisty peasant girls, vaudeville performing gypsies, a blinded war veteran, bandits..... All of them like to lecture our hero (and thus also the reader), and it's sometimes a bit of a trial to plough through the text - which is often entirely in Spanish.  Still, it's a gripping read, and as an aspiring writer myself, it's hard not to be intimidated by the excellence of the writing here.

"Cities of the Plain" is up next, where the protagonists of the first two books meet, several years after the events described in the preceding novels.  I'm planning on getting stuck straight in.  You can't argue with a good book and I'm on something of a roll.

McCarthy barely uses any punctuation at all, but his writing is often breathtaking and frequently feels profound.

No one can tell you what your life is goin to be, can they?
No.
It's never like what you expected.
Quijada nodded. If people knew the story of their lives how many would then elect to live them?

There is also a pervading air of sadness.  As a melancholic myself, perhaps that's what I like most about the books; that sense of irrevocable loss.
Posted by swisslet at 22:08