I loved this song from the moment I first saw her perform it on Later.....  and it's a great performance too.... I knew nothing about Lana del Rey and downloaded the single immediately.  I bought the album, but by then there was already a fair degree of cynicism about her music business contacts, her father and the initial thrill seemed to have worn off.  It was alright, but I didn't really listen to it all that much.  I picked it up again the other day, pretty much because it's still on my "LISTEN TO ME" playlist on my iPod and I was adding a load of new stuff and generally having a clear out.  Not only did she survive the cut, but I realised that actually, whatever her background, this is a pretty good record.  That's surely all that matters, right?

I'm pretty sure that this is a low-level earworm in my brain all the time.  Putting it on a shortlist for a playlist I'm making for a friend was just asking for trouble.  It isn't making the final cut, but the damage is done.

Accept no substitutes.  We've got a new programme manager working in our team at the moment. He's somewhat pompous, but he did spot my Billy Bragg mug, and it turns out he's absolutely crazy about music.  I was talking about the Clash (their performance at Rock Against Racism politicised a young Bragg), and he told me that he met the Clash when he went into their dressing room at a gig at Leeds University in 1977.  Mick Jones liked his Kiss t-shirt.  I was suitably impressed, I think.  He does think that there hasn't been a good British band since The Smiths and reckons that the dance music of the early 90s killed music, but no one who likes music that much can be all bad, I reckon.

The old one, that is (1978, apparently, but I don't know how long they used it for).  You know, with the comic strip start with the sausage on a fork.  Yeah.  That one.  I've no idea where it came from, but there you go.  Brilliant tune and pretty good opening credits sequence too.

I heard a Doves song on the radio this morning.  It was good, but it wasn't this and my internal jukebox immediately spooled this up.

They rescued my night at the NME tour the other day and I've had their excellent album out again this week.  I keep thinking about the Beta Band when I hear them, but I think that's as much in my head as it is a direct influence, to be honest.  You know when you reach the point where pretty much every piece of new music you hear reminds you of something else?  Yeah, it's probably that.

Jake Bugg is eighteen years old.  If he's seen it all, then I'm a dutchman.

I just can't shake this song out of my head.  You can still see the band's Maida Vale session on the 6Music website, and I strongly encourage you to do so.  You know when you hear a song you haven't heard before and it makes the hairs on the back of your neck stand up?  Well, it happened to me with this song and it quickly sent me scurrying for more.  The last time that happened to me was "I Bet You Look Good on the Dance Floor" by Arctic Monkeys.  I still love that record and I'm currently very much in love with this one.

I'm on a bit of a Kraftwerk kick at the moment, no doubt sparked by their residency at the Tate Modern.  Listening to this song - and it's a great song - makes you realise just how much Coldplay owe them for "Talk".  I mean, I know they asked permission of Kraftwerk and give the appropriate songwriting credits and all that, but they really have just lifted and shifted that hook and moved it from a keyboard onto a guitar.  I suppose that's okay, but it does also kind of mean that it's now more or less impossible to listen to the original without receiving a supplementary earworm at the same time.  When David Bowie asked Kraftwerk in the 1970s if they fancied doing a collaboration, they didn't even bother to respond... and they said yes to Chris Martin.  Go figure. 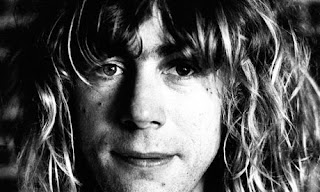 Was sad to read the news this week of the death of Kevin Ayers.  I won't say that I'm a long-term fan, but I was pointed in his direction by a shuffleathon disc I received from Mike five or six years ago (2007!).  Amongst many other splendid tracks was this one.  He's one of Mike's heroes, but I'd never heard of him, and this song was more than enough to have me looking for more.  That's how it should work, I think.  Anyway.  Sad news indeed.

Right.  That's your lot.  Have a good weekend, y'all.  England v France in the Six Nations is always a big weekend in our house and bragging rights depend upon the result, so cross your fingers for me.
Posted by swisslet at 17:30