live alone in a paradise that makes me think of two... 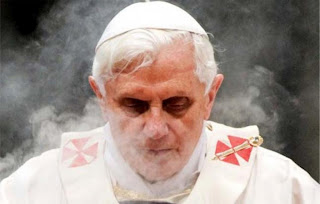 Honestly, my very first thought when I heard that Pope Benedict XVI was stepping down?

I wondered how you could be formerly infallible; how your word could one day be equal in the eye of the church to the word of God and then the next day not?  I then wondered about what kind of retirement package there might be on hand for an ex-Pope.  He's stepping down because he's 85 years old and worried about his ability to perform in his role as he becomes ever older and more infirm (probably mindful of his immediate predecessor clinging on to the bitter end).... but does he keep the same health package?  Is he going to have access to the same treatment as when he was God's Supreme Representative on Earth?  Does he still get referred to by all and sundry and his magnificent holiness (or whatever), or do people just start calling him Herr Ratzinger again? Or maybe just Joe.  Louie, perhaps?  Does he have to move house?

All, I think you'll agree, the key questions that should be at the forefront of the international debate on the abdication of a Pope.  I've not really been watching the news today, but what else would you want to know?

My next thoughts were prompted by my background as a student of Medieval History - a period where religion in general and the Catholic Church in particular loomed large.  Reformation, Counter-Reformation, Indulgences, Religious Wars.... the Middle Ages had it all going on.  When was the last time a Pope abdicated, I wondered.  Has it even happened before?

Well, it has happened before.  Not since 1415, but it has happened.  More than once, actually.  To quote the Catholic Encyclopedia (and yes, I was sad enough / interested enough to be looking this up at lunchtime):

Abdication, ecclesiastically considered, is the resignation of a benefice or clerical dignity. Every such honour or emolument, from the papal throne to the humblest chantry, may be resigned by the incumbent.  All doubt as to the legitimacy of papal abdications and all disputes among canonists were put an end to by the decree of Pope Boniface VIII which was received into the Corpus Juris Canonici (Cap. Quoniam I, de renun., in 6). The Pontiff says:
Our predecessor, Pope Celestine V, whilst he governed the Church, constituted and decreed that the Roman Pontiff can freely resign. Therefore lest it happen that this statute should in the course of time fall into oblivion, or that doubt upon the subject should lead to further disputes, We have determined with the counsel of our brethren that it be placed among other constitutions for a perpetual memory of the same.

Boniface VIII had good reason to confirm the principle, of course: his predecessor, Celestine V, had been the first Pope to decree that Papal abdication was allowed..... he had been a hermit who had the office thrust upon him.  It was a job he did not want and was ill-suited for, and not surprisingly, mere months after legalising Papal abdication, he took advantage of it and stepped down in 1294.  He lived the rest of his life - before his probable murder - imprisoned.  His successor, Boniface VIII was terrified lest his predecessor prove more popular.  Like any other absolute monarch - which is what the Pope was and still is - he took steps to ensure his security upon the throne... first by confirming that the abdication had been legal, and then by taking more extreme measures.  Probably.

Anyway.  So Benedict XVI isn't the first Pope to step down from office.  But you probably knew that already.  I'm atheist and find the whole thing utterly absurd, of course, but apparently once a historian....

Needless to say, I have personally been in contact with the Conclave of Cardinals today.  I have let them know in the clearest possible terms that, whilst I am not seeking the office of Pope, I will serve if called upon to do so.  It is, after all, time for a truly Progressive Pope.

Onwards to the Fourteenth Century!
Posted by swisslet at 22:02