we just lit the fire and now you want to put it out... 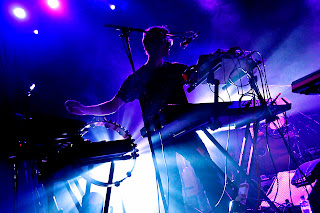 Sometimes, listening to music needs to be a solitary experience. Radiohead’s “OK Computer” is a magnificent album, of course, but for me it is best enjoyed when enjoyed through a really good pair of headphones, ideally whilst sitting in your favourite chair next to the radiator. The album came out when I was still working in HMV and, although I was pleased to have a band I liked on the PA all day instead of the Spice Girls, the album didn’t grab me in the same way that The Bends had. It wasn’t until I chanced to listen to it through headphones that it really came to life for me, specifically it’s Thom Yorke’s breathing on “Exit Music” that was the specific moment that changed my mind.

At other times, of course, music is best enjoyed as a communal experience. I’ve been to lots of gigs, over the years, and every now and then you are lucky enough to be present in one of those magical moments when band and audience unite into one transcendent experience. It doesn’t happen as often as you might like, but when it does it is just beautiful. Off the top of my head, Coldplay when they first headlined Glastonbury in 2002, Snow Patrol at that charity gig one Sunday night at Rock City in around 2004, Muse when they headlined Glastonbury properly, Metallica when they toured Death Magnetic, Elbow… any time, Billy Joel at the NEC, even. Even at a shitty gig, there’s usually at least one moment where you feel your soul lifting.

Which brings me to this year’s NME tour.

Last time I attended this gig, an annual touring showcase of bright young things, it was sponsored by Shockwaves and I felt like the oldest man in the universe. As if that wasn’t bad enough, I had the distinct pleasure of witnessing Joe Lean and the Jing Jang Jong, the single worst act I have ever seen perform live (remarkably, in their short career, I actually ended up seeing them twice, which seems a little masochistic, but there you go). This year, the main draw for me was the headliners – Django Django, a band I would happily watch on their own. As it was, I had the distinct bonus of three other acts to enjoy first. The place was packed out with kids, of course. I’m not sure how discerning they are, but they were certainly having it on the dancefloor. Bless them. New to alcohol and new to gigs. Exciting times.

I only caught the last song by Peace, but as I stood at the bottom of the Rock City stairs, the song that I could hear drifting down sounded so similar to “Drain You” by Nirvana that I thought it was a cover. As we ascended to the main hall, it became clear that this was, in fact, the band’s own song. One of the advantages/disadvantages of getting older is that I now listen to new bands with a built in set of filters that sees me processing who I think their influences are and where I heard this stuff the first time around. Seriously though: most people remember “Nevermind”, don’t they? Not impressed. One song was enough.

Palma Violets are the latest in the long line of bands hailed by the NME as being the saviours of Rock n Roll. Well, on the basis of this performance, I can tell you that they’re not. The sound, to my ears, like a shambolic version of the Libertines. Yes, shambolic even when compared to the Libertines. Imagine that.  Their performance seemed to consist mainly of looking over-excited, jumping up and down and bellowing into a microphone. I was not impressed. To be fair, they did have some technical difficulties that seemed to take the wind out of their sales three-quarters of the way through their set, but even before then they looked and sounded like a bunch of chancers who can’t quite believe they’ve managed to blag their way this far. I’ve heard them on the radio and I think they’ve got some tunes, but they sounded awful and looked desperately inexperienced. I’ve heard it before. Better. The kids loved them (well, until the end that was kind of ruined by amp problems, but they couldn’t help that).  Still, saviours of rock and roll, my arse (even if that comment says more about the NME than the band).

Miles Kane seems altogether too old for this thing. The poor boy has been around for a relative age compared to these other whipper-snappers. His band instantly showed that they were a much more grooved and experienced machine than either of the bands who came before them, and Kane certainly gave it everything he had – he looked absolutely delighted to be there – but the problem is that his songs are completely unmemorable. They have titles like “Never Forget Who You Are” and lots of oooohh, aahhhh, badabadabada-type choruses, but they’re hardly pushing the envelope much and it all feels a bit lazy. Passionately delivered, perhaps, but still lazy. He’s always going to be remembered as “the other one” from the Last Shadow Puppets, isn’t he? Still, I liked his band, especially the very dapper bassist and the drummer who looked like he was from the 1960s and was trying out new teeth. 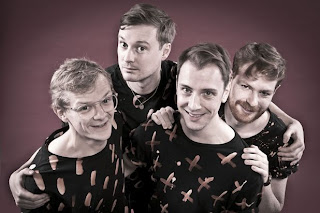 The crowd thinned noticeably before Django Django took the stage, and the older folk seemed encouraged to move from their quiet hiding places to venture out onto the outer-reaches of the dancefloor. The band took to the stage wearing matching shirts that reminded me – weirdly – of the horrors worn on the final day at Brookline in 1999 by the US Ryder Cup team. As soon as they got going though, I was reminded why we came to this gig in the first place: they’re a magnificent band. They remind me very much of the Beta Band (there’s a family link: the drummer is a brother of a guy in the Beta Band), but that’s no bad thing, and unlike the other bands on the bill, they are at least trying to find a sound of their own (well, Beta Band comparison aside, obviously). They’re marvellously geeky looking, and they sound great. Songs like “waveforms”, “default” and “hail bop” are properly brilliant and in a class of their own from everything else we’ve heard tonight. It’s a great show and just about rescues the night.

Word up to the funny guy in the sound booth. I have no idea what his job was, but as we were standing just behind him, he kept me entertained all night. He was reading a book, browsing National Geographic and ultimately having a snooze as the bands were playing in front of him. He actually started packing up his stuff before Django Django had even finished, so I’m assuming he wasn’t a vital cog in the machine… but was it really necessary to spend your time browsing porn on your iPhone? Seriously? There are people standing behind you, dude! That’s for your special private tingly times.

Anyway. It was a fun night, Django Django were magnificent and the kids had a great time throwing beer at each other. It’s all good, right?

(thanks to Sarah for procuring the tickets and to Mike for the beer.  IOU, etc)
Posted by swisslet at 21:13