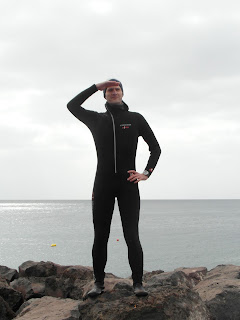 So yeah.  We went diving.  It involved a lot of posing in wetsuits, although perhaps - on reflection - that might just have been me.

We learned to dive on the Great Barrier Reef on one of the early legs of our 2010 adventure.  We completed the basic PADI Open Water course and took a couple of steps towards the Advanced Open Water course (including the deep dive, which crucially qualifies you to dive to 30m instead of just 18m).  We've been meaning to finish off remaining couple of modules to qualify for some time, and it was only when we got to Christmas and realised that we had something ridiculous like 24 days of holiday to take before the end of March that we just took the plunge (if you'll pardon the pun) and booked a diving trip. 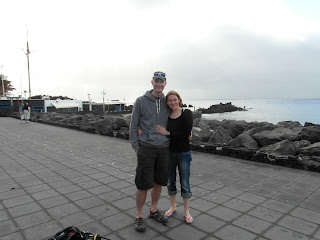 We've dived in all sorts of places: Australia, New Zealand, Canada, Vietnam, Zanzibar... but we'd never dived in Europe.  Lanzarote is 1000km from Spain and only 100km off the coast of Morocco, but it is technically still Europe, albeit warmer.  Normally, your first choice of European diving destination would probably be the Red Sea, but the Foreign & Commonwealth office are advising that you give Egypt a miss... besides, I'm not sure how comfortable I am staying in a walled compound, no matter how safe it is, whilst the rest of the country is in turmoil.  Anyway.  Diving in the Canaries is supposed to be fantastic, with lots of volcanic features instead of reefs, so off we went. 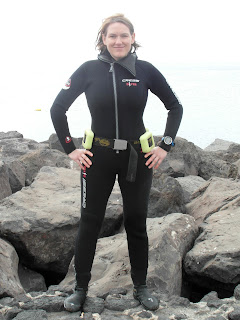 We're not really winter sun people, but the prospect of escaping the cold for a week was pretty enticing, and I could feel myself relaxing as soon as I stepped off the plane into balmy sunshine.  The sunshine didn't really last though: the temperature was around 23C all week, but it was more often overcast than not, and without the sun, the fairly constant wind really makes it feel a little bit chilly.  Well, chilly in the sense that you'd want to wear a jumper with your shorts, anyway.   You wouldn't believe how many people we heard moaning about the weather and how cold it was.  I know they were probably there to sunbathe, but seriously these people don't know they're born!  (and they were often the same people who sought out the 2 Euro pints of Carling in the British bars.  Each to their own, but I was perfectly happy with the 2 Euro San Miguels served by Spanish people in the local bars....)

The water was a cool 18C.  Not warm, but not too bad, if you could keep warm on your surface intervals when the wind really felt a bit chilly when you're wearing damp diving gear.  Visibility underwater was good too - 15-20m - and there's loads of stuff to see: barracuda, angel shark, electric ray, grouper, sea horses, sardine, puffer fish, scorpion fish, octopus..... as well as dive-able wrecks and some pretty cool volcanic caves and arches you could explore.  It was pretty cool. 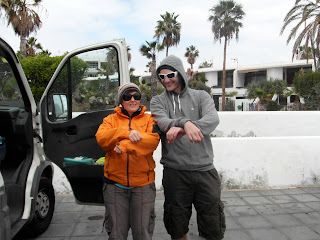 We qualified as Advanced Open Water divers after only a small hiccup involving underwater navigation with a compass - diving is all about buddy communication, you know* - but we sorted that out fairly quickly and enjoyed a few leisure dives with Cat, our instructor.  She was great, although she needed a bit of help with the underwater signalling for a seahorse, Gangnam-style, but with a bit of practice, I think she got there in the end.

[* C would want me to point out at this point that, although I now have a rattle to use underwater to get her attention, I never actually needed to use it in anger] 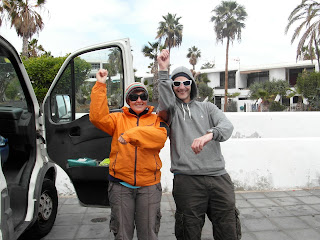 So yeah.  It was good.  Good diving, nice hotel (full of iron man triathletes talking about how they were planning a 200km cycle as they loaded their plate with donuts for their healthy, nutritious breakfast...the whole island is only about 70km long), good food -- apart from a hysterical interlude in the restaurant that the 1970s forgot, so bad that C joined Trip Advisor just to review it - and good company.  It was a real treat to get back to work on Monday this week, let me tell you.

Next holiday? We're off skiiing in Canada in about 4 weeks time.  Well, someone's got to do it.
Posted by swisslet at 18:43