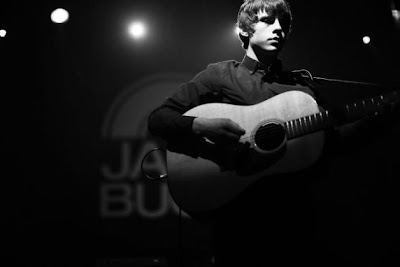 Until October last year, apparently Nottingham had never produced an album that had topped the UK chart.  The closest we got, so I'm told, was the Stereo MCs in 1992 reaching number two.  Given the much trumpeted musical legacies of cities like Birmingham, Sheffield, Liverpool and Manchester, this seemed a bit of an oddity.  Actually, Nottingham has an absolutely thriving music scene at the moment, as local expert Mike Atkinson wrote in the Guardian way back in 2011.  Well, 18 year old Jake Bugg is forging the way: he's had a number one album, supported Noel Gallagher (heavens!) on a US tour and was now coming back to Nottingham for a triumphant, long sold-out homecoming gig at Rock City.  To make things even more exciting, earlier on the day of the gig, it was announced that Bugg would be headlining the city's annual Splendour Festival later on this year.  He's very much the man (child?) of the moment, and this gig was very much a hot ticket.

Luckily for me, local NG cultural expert Mike Atkinson was reviewing the gig and had a spare plus one ticket which I was delighted (and very surprised) to be able to snaffle at the last minute.
[Mike's review is here, by the way].

I've been going to Rock City for a many years now, and for my money it's never really been the same since the changed the air conditioning.  It's probably good that it no longer rains sweat, but it does seem to have meant that the old place seems to have had the edge taken off the atmosphere.  It's still a great venue, with the steps to the dancefloor and the stairs to a first floor balcony creating a real bear pit of an arena, but it just doesn't seem to be the same.  Tonight though, the place is absolutely buzzing.  It's an early gig, with the headline act onstage at 20:45 and with a curfew at 22:00, but it really doesn't seem to matter: people are chanting "Nottingham!  Nottingham!" and they really, really want to see their hometown hero.

Jake Bugg has famously spoken out against the X-Factor and its influence on musical culture, and his warm-up tape seems to have been carefully crafted to emphasis Bugg's authenticity and his love of *proper* music: it's all classic blues, the Who, Hendrix and stuff like that.  Mind you, I remember being eighteen, and in the immortal words used in High Fidelity, WHAT you like is far more important than what you ARE like.

I saw the Palma Violets on Tuesday night in the same venue as part of the NME tour, and they were full of nervous energy and did a lot of jumping up and down and shouting, as though they can't really believe where they are.  They also weren't very good.  By comparison, Jake Bugg is an incredibly nonchalant stage presence: he's good and I think he knows that he's good.  There's no jumping up and down and very little banter with the audience - Bugg just gets on with what he does best: playing his guitar and singing his songs.  The crowd go mad, singing along with every word of every song, going crazy when he hits "Trouble Town".  Bugg tells us that it's always nice to come back to his hometown, but if you listen to his lyrics, that sometimes seems a little hard to believe.  "Stuck in speed bump city where the only thing that's pretty is the thought of getting out"?  Still, the crowd joyously claim him as one of our own anyway.

He's good.   Really, really good.  There's no question about it: they boy has talent.  It's easy to forget that he's only eighteen years old when you listen to songs that seem rooted in a much deeper tradition.  Sure you listen to something like "Slide" and it's impossible not to hear the echoes of Richard Ashcroft, but in general Bugg is ploughing his own furrow.  The Palma Violets have been listening to the Libertines, but Bugg has been listening to Johnny Cash and Bob Dylan too and is creating music with a much greater depth of influences than your average chart-topper.  What strikes me too is quite how good a guitarist he is.  I've not really noticed this from listening to the album, but when you see him onstage, accompanied only by a bassist and drummer, he's really outstandingly good.  He peels out a magnificent, rocky solo on new song "Slumville Sunrise" and seems to play a different guitar for every song on the setlist.  I'd kind of assumed that he was an acoustic strummer, so his virtuosity is something of a revelation.  The uncle who bought him his first guitar and lent him the record collection that got him started must be bursting with pride.

We have an acoustic interlude of "Someone Told Me", "Country Song" and "Note To Self" before the band rejoin Bugg onstage for "Someplace" and then we have a joyous final race to the line through singles "Two Fingers", "Taste It" and an outstanding "Lightning Bolt".  The crowd go predictably wild, and Bugg isn't done just yet, coming back onstage for a version of "Broken" that is turbo-charged with emotion by the accompanying crowd.  To finish, Bugg gives us a stonking version of what he tells us is one of his favourite songs, Johnny Cash's "Folsom Prison Blues".  Compared to what has gone before, the crowd reaction to this is ever-so-slightly muted.  The kids, it seems, just don't know Cash.  Well, that's their loss.  Even without Cash's magnificent bass voice, Bug makes a decent fist of one of the all-time classic songs.  I enjoyed it, anyway, even if the kids were a bit baffled.  Me and the other old folk sang along....

An eighteen year old kid closing his stonking homecoming set with a Johnny Cash cover?  Jake Bugg, you had me at "hello".....

He's an incredible talent and he seems to be taking everything in his stride so far.  I reckon he's here for the long-haul and I consider myself very lucky to have seen him in such a relatively intimate venue (thanks Mike!).  Superb gig.  Radio One were there too.  I wonder when I was last at a gig covered by Radio One.... I'm not even sure if it would be in this century.

Set list:
Fire, Kentucky, Love Me The Way You Do, Trouble Town, Seen It All, Simple As This, Slide, Slumville Sunrise, Ballad Of Mr Jones, Someone Told Me, Country Song, Note To Self, Someplace, Two Fingers, Taste It, Lightning Bolt, Broken, Folsom Prison Blues.
Posted by swisslet at 16:08