...all the way to the horizon 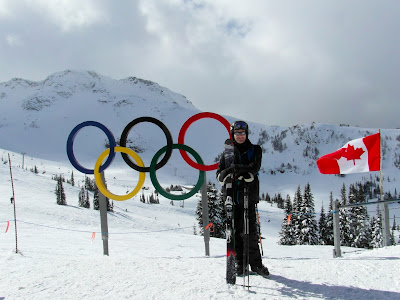 People who ski there say that Whistler is one of the most amazing skiing areas in the world.  Well, I've skiied in France, Italy, Austria and in other resorts in Canada.... I don't know if I would say that it's the best pure skiing resort that I've been too, but it's definitely one of my favourites.  When I've skiied in Canada in the past, the slopes have been great but we've always had to take a bus to get to the piste.  In Banff, that can mean over 40 minutes to get out to Lake Louise.  It's a beautiful drive, so it's not really much of a problem, but there's an awful lot to be said for a ski in / ski out location... which is exactly what we had here.  Our accommodation was simple but comfortable, with excellent hot tubs, a regular shuttle bus into the village and - crucially - access right onto the side of Blackcomb mountain.  It was perfect. 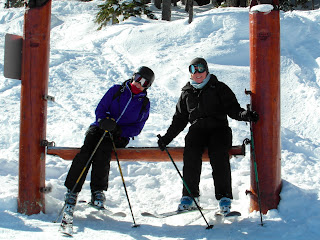 The ski area in Whistler / Blackcomb is both huge AND compact, which means that you can get across to almost anywhere without too much trouble... especially now that they've opened the Peak 2 Peak to take you across from one mountain to the other without needing to ski all the way down to the bottom.  This being Canada, you also get huge long runs through the trees and not just the high alpine stuff above the tree-line.  I enjoyed many of the runs off Crystal and Symphony, but the "Peak to Creek" run off the top at Whistler in particular is a real marvel: at 3.3 miles, it's the longest intermediate run in North America and is supposed to be one of the top 5 ski pistes in the world.  It's EPIC.  They even provide a bench for you to take a breather halfway down (and you can get a pretty decent Caesar cocktail in Dusty's at the bottom too....mmmm.  clamato juice, vodka, hot sauce, celery salt and bacon all in one drink?  Yes please!) 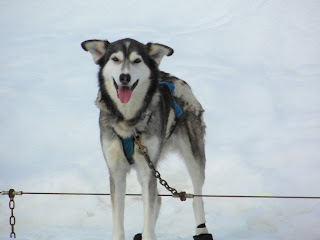 We also went dog sledding again.  Well, who can resist a face like that? 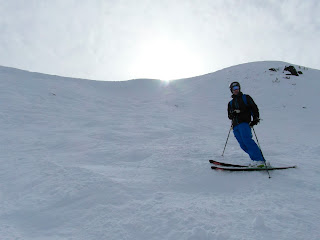 When it comes to skiing, I reckon that the approaches taken by my wife and I model our approach to our careers: I'm technically proficient but like to operate well within myself; my wife on the other hand is not just a more aggressive skiier than me, but she is also occasionally slightly more aggressive than her technique allows.... this means that she pushes herself much harder.  She ran into a tree on one occasion too.  You can still see the bruise.....although I believe the tree was okay too.

As we try to do every time we go, we had a lesson to try and move our techniques on a notch and to get a little better with every year.  This year, our instructor offered us the choice of a more technical lesson on normal slopes, or the chance to push ourselves a bit and try some trickier terrain.  We opted for the latter, something I wondered about when he ducked us under a rope on the top of a ridge, past the "Danger! Cornice!" signs and had us skiing over the edge.

"Oh, don't worry about those black marks.  That's not rock, it's the gunpowder from the avalanche cannons...."
Sadly, the photo above looks a lot flatter than the gradient actually was, but look how hard I'm leaning into the slope and the curve on my skis.  Take it from me: it was pretty steep.  Steep, but also soft: C. tackled about 30m face first and, when she finally stopped moving, got up smiling and without a bruise.  We skiied for ten days in total, and that afternoon aside, I only fell over once (when I crossed my skis on a black mogulled run).   That afternoon with the instructor, I must have fallen over around 10-15 times.  A pretty sure sign that I usually operate well within myself.  It was a great afternoon and I learned loads. 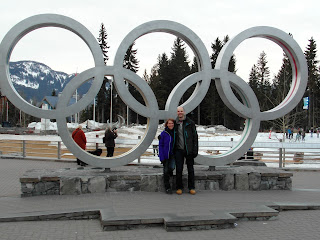 The skiing was good then.  We had good weather and good snow and a decent amount of sunshine.  It was nice.  I also ate like a horse and drank like a fish: steak, burgers, huevos rancheros, waffles, pizza, poutine, wings, huge caesar salads, ice cream and as much honey brown beer as I could lay my hands on.  I was convinced I would have put on a load of weight.  You know what?  I lost 2kg (and I think I'm as light now as I can ever remember being).

I reckon I could sell that kind of diet plan.

On our last morning before our transfer back to Vancouver, we also stumbled across some rangers carefully darting and moving a moose that had wandered down into the valley.  You don't get to see that sort of thing in Courchevel, do you?  (and even if there were moose there, I'm pretty sure it wouldn't take the Russians long to shoot them all).  From the bear-proof bins in the village to the reports of the dog walker who saw a cougar, I love how connected with nature you are in Canada, even in one of the biggest ski resorts in the world.

I heart Canada and I can't wait to be back.
Posted by swisslet at 18:12