never judge a book by its cover.... 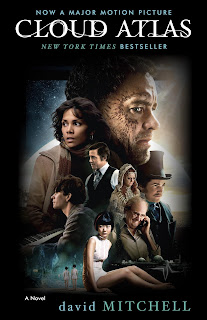 When it comes to books, what you like is such a personal thing, isn't it?  Well, now I think of it, I suppose that's true of everything, really: music, films, comedy, which vegetables you like... everything.   Hmm.  But - for me at least - books somehow feel especially personal.  Reading a book is such a private thing, isn't it?  When you're reading something you've never read before, you're creating a world completely in your own head from the text.  The characters are drawn from the page into your imagination and you give them faces and voices.  If you and I read the same book, the world will be drawn from the same source and based upon the same descriptions, but if we were to compare, nothing else would be quite the same and your world would be subtly, but definitely different to the way I had imagined mine.

Perhaps that's why adaptations of well-loved books are so difficult: most readers already have the characters completely drawn in their heads and may not care for the director's choice of actors or location.  If you're a fan of a book and the casting choices just don't chime with the pictures you have in your head, then the film is already off to a shaky start.  By the same token, once I see an actor in a particular role, it can sometimes be hard to shake their face out of your head the next time you read the book.  Because I was exposed to the BBC radio adaptation long before I saw the films or even read the book, when I read Lord of the Rings, I don't picture Ian McKellen as Gandalf, I always hear Michael Hordern's voice in my head.

A friend mentioned on Facebook yesterday that she loved "The Life of Pi".  Oh really, I said.  I managed something like three pages of that book before I had to put it down in disgust.  It just wasn't for me.  That's funny, she said.  That's one of my favourite ever books.  I was recommended Paulo Coelho's "The Alchemist" by someone who told me that it was not only his favourite ever book, but that it summed up his whole attitude to life.  I found it insipid and trite.  A dear, dear friend of mine suggested that I read "Blindness" by Jose Saramago as it was the most beautiful book they had ever read.  I found it turgid and pretty much unreadable (although, to be fair, I think that may have been down to the awful translation).

As I say, your choice of book is such a personal thing.  I'm told that many people really do enjoy the work of Stephenie Meyer and Dan Brown, if you can believe that.

Which brings me to Cloud Atlas.

I saw the trailer for this film and took one look at Tom Hanks and decided it looked terrible.  That same week, a friend of mine mentioned that he had been to see the film and thought it was a pretty good adaptation of a book that - as an author and a lecturer in Creative Writing - he taught on his degree course and thought was fantastic.  This made me feel a bit stupid, as I hadn't even realised that this film that I had immediately rejected was based on a book, never mind that the book itself was probably well worth a read.

As I'd just finished a Cormac McCarthy, I was in the market for a book to take to Canada and so decided to get myself a copy.  And here's the next problem: unless I wanted to pay more than £20, the easiest and cheapest edition of the book to get would be the film tie-in with Tom Hanks' face all over the cover.

Not only did I judge the book by it's cover (somehow made no better by the acclamation that this had been a book of the year on the Richard and Judy book club!), but I was worried about being judged by people who saw me reading it.  Pathetic snobbery, right?

And you know what?  It's absolutely brilliant.... and once I've finished it, I will doubtless watch the film too.  Tom Hanks notwithstanding.  It's a bit of a shame that the mere presence of Jim Broadbent and Halle Berry on the cover has pushed their faces into my imagination when I'm reading what I presume to be their characters in the film.  Still, that's a relatively minor complaint in the grand scheme of things.

So much for my preconceptions.  Just shows what I know, eh?

Perhaps I should give The Life of Pi a fair go too?  I'm afraid Angels and Demons is out though.  The Da Vinci Code was enough Dan Brown for me to read in one lifetime, thanks very much.
Posted by swisslet at 21:01