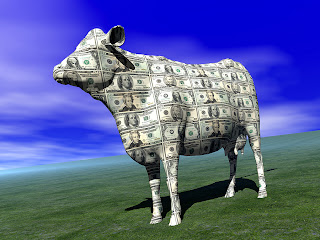 I read a fascinating blog post the other day by Lisa Emrich on the cost of Disease Modifying Drugs for MS. It was pretty old (March 2011), but it's only become more relevant over the last couple of years.

I inject Avonex once a week into my thigh. This is provided to me at no cost by the National Health Service. I knew that this was eye-wateringly expensive, but I really had no idea.

That's a lot of money.  When you factor in the likely cost of visits to the neurologist, various scans and blood tests and things, then I am well aware of how lucky I am to live in a country where the burden of my treatment is carried without question by the state.

As Lisa's post highlights, the company that makes Avonex reported total sales of something like $2.5b in 2010.  According to a MarketWatch report, "the multiple-sclerosis market could grow to $15 billion by 2015." (The multiple sclerosis market, btw, is people like me...).

When you bear in mind that none of these drugs are claiming to do anything other than *maybe* slow down the progression of an otherwise incurable condition, and there's actually not much evidence that they even do that and certainly no way of me knowing if my weekly injections are working for me, that's a remarkable amount of money.

Doesn't it make you think, though: how much is it going to be worth for a drug company to fund the research into an actual cure for multiple sclerosis?  Is it going to be anywhere near as much as they currently make out of these disease modifying drugs?  Hmmm.  Not likely.  Apart from anything else, I have injected Avonex every week since the Spring of 2009 and, unless something changes, I'm going to be taking it indefinitely.  That's a regular revenue stream that might last for decades and can be regularly squeezed with price increase.  Unless the cure is a drug that I have to take on a similarly regular basis, then it's not likely to be as worth anywhere near as much, is it?  A one-stop solution?  Forget it.  So what's their incentive to change the status quo?  Apart from perhaps to find a next generation version of the same thing that might entice people to switch medications, not much.

Isn't that an incredibly depressing thought?

I suppose I should be grateful that, although I may be worth tens of thousands of pounds a year to the drug company, the NHS in Nottingham put me under absolutely no pressure to choose one drug over another.  Budget was simply not a consideration: I was given all of the information about the various options (including a 'do nothing') and was able to make a completely free choice without cost coming into it in the slightest.  It wasn't even mentioned.  Not once.  Isn't that an amazing thing?  I know it's not the same everywhere in the UK - my younger brother was put into the hands of a drug company funded nurse fairly early in the process - but here in Nottingham I was encouraged to make the choice I thought was best for me.  If I ever change my mind, I will be able to change my mind.

Still, for all that the NHS is a unique and wonderful thing, it's still an uncomfortable thought to think of myself as a drug company revenue stream that can be milked.  It's also pretty unsettling to think that this simple economic fact is going to influence the funding decisions for the research that could find a way of getting rid of this damn condition for good.

Two years late, but thanks for the thought-provoking post, Lisa.
Posted by swisslet at 17:50