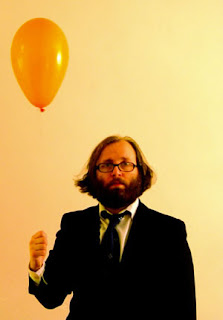 I saw Daniel Kitson performing on Sunday.  He was excellent.  I love the fact that he's a stand up who:
a) Sat down for the whole duration of the show behind a desk on the stage
b) Doesn't talk down to his audience.  At all.  He's not afraid to toss out ideas and thoughts and theories that assume that you are basically an intelligent human being and will be able to follow.  You actually have to concentrate on what he's saying for the best part of two hours with no interval.  I really like that.  He's not above the odd knob gag, obviously....but frankly, who is?

Anyway.  The show was about lots of things, but one idea that has stuck in my head was about memory.  Kitson talked about how strange it is when someone has a memory of you that you don't remember at all.  He also talked about how no one, even two people who were in the same place and saw the same thing, will have the same memory of anything.  I love this kind of stuff, and it's one of the reasons that I really enjoyed studying history... the simple, but mind-blowing, idea that there is no such thing as a FACT.

Anyway.  I digress.  When musing about the nature of memory, Kitson theorised that our memories are not actually little freeze-frames of an event in our lives, forever frozen in time exactly as they happened, but instead they are living things that are constantly changing and evolving.  In other words, we remember these things because we keep thinking about them and giving them a polish, and that in the act of polishing them before putting them back into storage, they are subtly changed over time.

That's an interesting idea.  Is it true?  No idea.  But what I do know is that I'm starting to get the same sense about this blog.  I've been writing this now since early 2004.  That's a long time.  You tell me, but I do sometimes get the impression that I'm telling you the same stories over and over again.... with the memory of that event getting subtly changed each time I tell it.  In my head, I was convinced that I saw Iron Maiden when they played at Donington in 1988, but when I wrote about it the other day, something made me check and it turns out that I actually saw them play there in 1992.  I had to go back over the post and correct some of the chronology, not to mention deal with the fact that I'd written the whole post around the assumption that I'd seen the band when they were touring "Seventh Son of a Seventh Son" and not "Fear of the Dark".  Dammit.

So what?  Memory can play tricks on you, right?  Yes of course, but whenever I sit down and write about how I first started listening to The Smiths (or feeling fat or whatever), I get this creeping sensation that I've probably told this exact same story here before.  Slightly differently.  Broadly the same, I'm sure, with most of the key points appearing the same every time, but each time I put metaphorical pen to metaphorical paper to write about that event again, I'm probably moving my own memory further away from what actually happened.

Is that a big deal?  Not really.  I'm pretty sure it doesn't matter at all.  In fact, it's mildly interesting to see how my OWN perspective on an event in my life is shifting.... but you will tell me if I start to bore you though, right?  If I'm repeating myself incessantly and telling you about ever-more-fictional events in my own life, then you will let me know, won't you?  I don't mind it when a TV programme starts with a quick recap of what's happened so far to bring you up to speed, but that's not a TV show in its own right, is it?

I'm beginning to bore myself, and that's never a good sign.

Email ThisBlogThis!Share to TwitterShare to FacebookShare to Pinterest
Labels: me, memories