wishing I was skinny.... 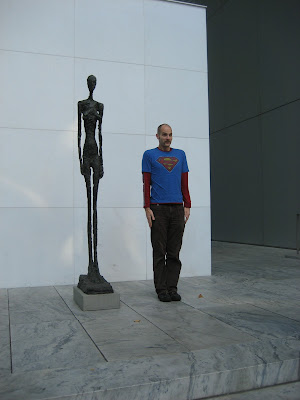 There was an advert on the TV a little while ago - for Dove, I think. I’ll let the Guardian describe the premise:

“The ad follows a forensic artist, one of those people who draws crime suspects based on witnesses' descriptions. In this case, he draws facial portraits of several women based solely on what they tell him. He can't see them. Then he draws pictures of the same women based on what people who have only interacted with them for a short while describe. In almost every case, there's a stark difference between the two images of each woman. The self-described portraits are uglier, sadder and almost sour-looking in some instances”

[you can watch the advert there too, if you're interested.]

The idea, I suppose was to show how our own mental image of ourselves is often a lot more negative than the reality.

I mention this because I’ve recently been forced to consider my own view of my body. Since I was about 7 years old, I’ve always had a view that I’m fat. I think this came from the simple fact that from around then, I started to be bigger than average. Hardly surprising really, given that I’ve ended up nearly two meters tall, but it’s incredibly damaging to a seven year old to have legs too big to fit into an average pair of shorts and to be forced to wear something with the magnificent label of “chunky shorts”. Since then, I’ve generally struggled to find off-the-peg clothes that really fit me because they’re cut for the average person and I’m not built like the average person. That shit stays with you.

By the time I was at University, I was fully grown but was also pretty hefty – a good six or seven stone heavier than I am now. I’m big and I have broad shoulders, so my frame hid the heft pretty effectively, but I was still a pretty substantial physical presence. Not fat, I don’t think, but my mental template was already fixed. Ironically, I was actually even nicknamed “Chunk” for a while.

I’ve lot a LOT of weight since then. My ribs show and everything; you can see the muscles in my stomach. I’m long and lean, but I still immediately reject it when people say that I am skinny. It’s simply not the way that I see myself and I probably never will, no matter how much weight I lose (and I’m lighter now than at any point in my life since I was a teenager, I think). I actually had someone ask me if I was still trying to lose weight the other day. I’m not, but she was marvelling at the enthusiasm with which I told her that the banana bread I was eating was entirely fat free. I eat it because I like it and it tastes good, but the way I describe it makes it sound like I’m dieting.

My MS is challenging my perception of myself too: I already knew that the muscles in my arms and shoulders are wasted to some extent (that’s one of the reasons I swim), but the specialist pointed out to me last week that my left thigh is noticeably less well muscled than the right due to wasting, and I’m gradually being forced to face up to the physical toll the disease is taking on my body too.

I’ve been bumping into a friend of C’s at the gym quite a lot recently. We’re reasonably friendly, so we tend to have a laugh about how we always seem to meet half-naked in the changing-rooms or up by the swimming pool, and rarely fully-clothed. But who doesn't enjoy meeting someone they know on the side of the swimming pool, eh?  Not at all awkward.  Anyway.  C had coffee with this guy the other day, and as she was talking to him about my bio-mechanical woes, muscle wastage etc. and how it’s all affecting my running, he remarked, “Yes, I could see at the pool that he was looking a bit spindly”

A bit spindly? I’m still struggling to adjust to the idea that I’m not fat. But spindly?

Who wants to look a bit spindly?
Posted by swisslet at 19:14

Email ThisBlogThis!Share to TwitterShare to FacebookShare to Pinterest
Labels: me, WTs