send this one out to the old school....

This is a massive few weeks for new releases: this coming Monday alone sees the release of both the New Daft Punk album, "Random Access Memories", and "Trouble Will Find Me" by the National.  Last Monday saw the release of Vampire Weekend's third album, "Modern Vampires of the City".  The schedules are packed with decent music just waiting to be released.

I don't know about you, but I always feel that this now produces something of a dilemma: CD or download?  Instinctively, I'm still the kind of person who likes to buy a physical copy and file it in the appropriate place on the shelves with my other CDs.  Some of my friends have got to the point where they've more or less sold or given away their entire collection of CDs, but I've got hundreds and hundreds of them and have no intention of getting rid of them any time soon.

That said, my consumption of music is now almost entirely digital.  Even when I have a physical copy, the very first thing that I will do with it is to rip it into iTunes and add it to my music library.  The CD itself may never actually get played before it gets put onto the shelf, and I will listen to the MP3 file either streamed to some speakers from my laptop or by using an iPod/iPhone.  I used to have a little wallet of CDs that I kept in the car, but these days it's just a simple cable and we're good to go with an iPhone wired directly into the car sound system.  That CD wallet is now kicking around inside the house somewhere, with the CDs still in it from the last time it was used.  Here it is..... Gorillaz, Rufus Wainwright, Snow Patrol, Arctic Monkeys, Beatles, Billy Joel, Kings of Leon, Killers, Editors, Moby, Radiohead.... so about 2005, I would say.  I've never even bothered to put the CDs back in their cases.

I suppose it's true that I quite like having a physical copy as backup.  I do buy and download music all the time, but I'm not quite at a place where I entirely feel comfortable putting my whole music collection into the cloud.  Some stuff, yes... and instant gratification is a marvellous thing, and back catalogue albums are often ridiculously cheap to download too (especially if you shop around).   But as I sat in front of Amazon the other day wondering if I should buy a CD or just pre-order the download of Monday's new releases, the price difference wasn't big enough to make me feel like I was wasting money on a physical copy.  So I bought the CDs. 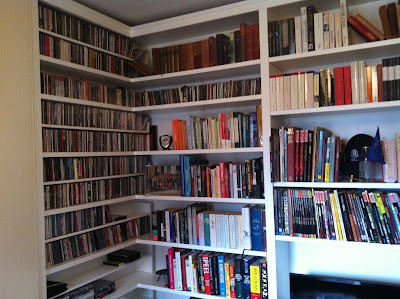 It's only a few months since we put a new shelving system into my cave to allow me to put all my CDs and books and things in one place.  It had been stressing me out for months that, if I wanted to put my hand onto my copy of "Graceland", one of the many albums in my collection that I've never quite got around to ripping, then I didn't know immediately where it was.  Now I do, and when I last fancied listening to it, I pulled it down, ripped it, put it back on the shelf and then streamed the music from my laptop through my good speakers.  Job done.

Apple TV is slowly starting to change the way I consume films - I bought my first ever film in the cloud the other day, "Batman: the Dark Knight Returns part 1".  It sits on Apple's servers and can be downloaded onto any of my devices at any time, but I do not possess a physical copy.  At the moment, that's the exception rather than the rule in my collection, and it's a slightly odd feeling, but it is SOOOOOO convenient.  Storage is cheap, but I don't want a de-facto set of servers in my house and I'm more than happy to outsource that service to Apple or to Amazon to do it for me.  I've never really got into Spotify, but I imagine it's a similar sort of thing.

Ah, but I'm only renting content and who is to say that these companies can't strip it away from me at any time.  Well, let's not forget that I bought the original Star Wars trilogy about four times in different formats and in different versions.  Just because I owned it on VHS didn't stop me buying it again on DVD.... this isn't really so different to that, is it?  I suppose I could have held onto my VHS player, but I willingly upgraded to something else.

Anyway.  What do you do? Do you download everything or are you a (mostly) luddite like me?   Thinking about it, it's probably just as well that I never got into vinyl.  Can you imagine what my house would look like now?  Didn't John Peel's house need reinforcing to support the weight of all his music collection?  Well, maybe not quite that....

Incidentally, on the subject of my new shelves.... 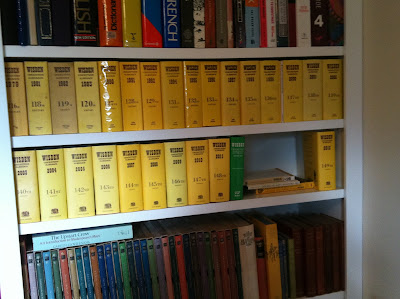 .....now that's what I call a proper bookshelf.  It's not a man cave without many virtually identical books  of cricket statistics (and some Shakespeare folios).
Posted by swisslet at 19:13