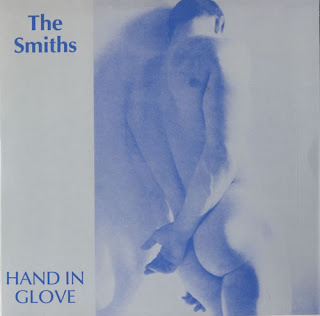 It's thirty years and one week since The Smiths released their debut single, "Hand in Glove".  I realise I'm a little late on this and should probably have mentioned this last week, but I've been listening to the band a lot over the last few days and have been thinking about how much they meant to me.

I can actually remember the Top of the Pops that featured the band's debut performance in November 1983.  They played "This Charming Man" and Morrissey caused quite a scene waving his flowers around the place.  Do I remember that?  No.  I remember watching it because "Uptown Girl" by Billy Joel was UK number one and I do remember watching that, dressed up in my dressing gown.  I didn't get into the band until much, much later.... some time in late 1992 or early 1993.

The first albums I ever owned were things like Adam and the Ants, Nik Kershaw, a-ha and Five Star.  The first album I ever bought for myself was "The Number of the Beast" by Iron Maiden some time in late 1987.  This was an enormously formative period in my musical life and I spent enormous amounts of time listening to bands like Aerosmith, Guns N Roses, Queensryche, The Almighty, Poison, Faith No More and - save me - Poison.. briefly, and I never really got into Motley Crue.   By the time I turned sixteen, although heavy metal was still a real staple part of my musical diet, I was also starting to listen to The Doors, Lou Reed (especially his "New York" album) and was discovering classic rock by the likes of Black Sabbath, Led Zeppelin and Deep Purple.  The charts at the time seemed to be a pretty bleak place, and - somewhat ironically given how much I like them now -  I viewed people like the Cure, the Stone Roses, the Happy Mondays and James with a deep suspicion, never mind the rest of it.  I don't remember coming across the Smiths at this point, but I'm sure that if I had, then I would have loathed them.

Nirvana caused a bit of a stir, of course.... although, for a fan of rock music, it really wasn't such a great leap from the Red Hot Chilli Peppers to the Seattle scene.  At least it was real music, right?  The first album I listened to after my parents left me at University was "Southern Harmony and Musical Companion" by the Black Crowes, and at some point in my first year at Warwick, I attended a legendary Faith No More gig at the Birmingham NEC where seat covers rained down on the band as they played their encore of "Easy".  I had posters by people like Therapy on my wall and I was happy with my black leather biker jacket listening to heavy metal.

And then The Smiths changed everything.

I can't even remember how it happened, or how I even ended up with a borrowed cassette copy of part one of their greatest hits, but somehow "Half a Person" struck a chord and I never looked back.  I was nineteen years old, but I think emotionally young for my age, and there was just something about Morrissey's lyrics that spoke to me.  It was always about the lyrics too, at least at first.  Not for the first time and certainly not for the last time, it was Morrissey's words that chimed with a lonely teenage boy who craved an emotional connection.  He just seemed to have an uncanny knack of expressing a yearning I wasn't able to articulate for myself; he seemed to understand how I felt.  An appreciation of what Johnny Marr brought to the band only came much later.  For me, then at least, it was all about Morrissey.

I hungrily began to buy the music.  Ironically, at the time, it was actually quite hard to get hold of Smiths CDs: the originals were out of print and the Warners reissues hadn't yet begun.  I can vividly remember trawling a record fair at the Birmingham NEC and coming home triumphantly with a French import copy of "Hatful of Hollow" on CD.  Imagine that.  Now you can just download pretty much everything the band ever recorded instantly.  It's not a proper album, of course, but "Hatful..." remains my favourite long player by the band.  There's just something about the rawness of those session versions that really brings those songs to life.  Morrissey's yelp on "This Charming Man" is just electrifying.

I never gave up on rock music, but I also began to listen to bands like Blur, Suede and Radiohead.  Mostly, though it was always The Smiths and then Morrissey's solo work.  Nothing else touched me in the same way and I'm fairly certain that nothing else has got close since.  They are without a shadow of a doubt the most important band in my record collection.

The Smiths weren't a perfect band ("Golden Lights" anyone?), and goodness knows Morrissey is increasingly a loud-mouthed, opinionated idiot who doesn't think before he speaks... and they also seem to have more than their fair share of irritating fans who try to write about their favourite band in the way that they imagine Morrissey speaks, using mainly song lyrics for their turns of phrase.... but in spite of all this, and in spite of some of Morrissey's solo output, no other band has meant as much to me as The Smiths.  No one.   I found them relatively late and long after they had ceased to exist, but no one else has inspired such a fierce, possessive devotion in me.

I have been listening to a lot of their back catalogue this week, and the records still sound amazing to this day.  The chemistry between the band members, especially between Morrissey and Marr, just sparkles and crackles out of the speakers.

I've done a lot of growing up since I was nineteen years old, but there's a part of me that will always be that shy, lonely boy who found comfort in these records, and I'll always be grateful to the band for that.
Posted by swisslet at 22:51

Email ThisBlogThis!Share to TwitterShare to FacebookShare to Pinterest
Labels: memories, more important than that, music