so good to be an ant who crawls atop a spinning rock....

“All the Young Dudes” – Mott the Hoople

Written by David Bowie, of course but it’s very specifically the Mott the Hoople version that’s been pinging around in my head since I heard it on the radio whilst I was getting ready for work the other day. Speaking of Bowie, I watched a large chunk of “The Man Who Fell to Earth” the other night. Is that film supposed to make sense? It’s awful, but I was mesmerised by it for about 90 minutes before finally tearing myself away. Anyway. This is a marvellous record.

I hate Queen. Sadly, this popped into my head whilst I was pushing a trolley around Sainsburys, and dislike the band thou I do, it would be churlish to attempt to deny the weapons grade power of this record.  What can you do?

“Up the Junction” – Squeeze

It’s not specifically this song that I’m earworming, to be honest… but I woke up on Thursday morning with a kind of wordless generic Squeeze song running around my head. I hummed along for a little bit, decided it wasn’t actually a song at all, but of all the songs it seemed to be a composite of, it was mostly this one. Is this how McCartney felt when he woke up with “Yesterday” in his head and couldn’t believe that it wasn’t a song that had already been written? Have I woken up on a goldmine and completely failed to cash in? Hmm. Doubtful. If the finished product sounded a bit like Squeeze, I can’t imagine that I’d be making all that much money out of it, eh?

Probably inspired both by spending a weekend watching England beat New Zealand in the cricket, making use of my membership of Nottinghamshire to spend a sunny Sunday afternoon at Trent Bridge watching the Pro40 and by the fact that I’ve snaffled some tickets to watch the Duckworth Lewis Method on the night before the first Ashes test in July (even if I knocked back the chance to interview Neil Hannon). This is a lovely album full stop, but this song is so evocative of so many of the things that make cricket such a wonderful game. Is there anything more splendid than sitting in an English summer and watching a game of cricket? The best of games, in fact. British Lions notwithstanding.

One of my colleagues is just back from watching Depeche Mode at the O2, and we were all a little bit taken aback when two of the younger members of the team professed total ignorance of the band. It turns out that they actually knew a couple of the records (they knew the “reach out and touch faith” bit of “Personal Jesus”, for example), but were essentially blissfully ignorant. What gets me is the total lack of curiosity. They say that this stuff is all before they were born, but I listen to music by people from before I was born, so why should they be any different? I probed. They’ve heard of the Beatles of course, and Presley and the Rolling Stones and the Monkees and Madness… and also Jimi Hendrix, apparently. This then led to a debate about record sales: I reckon that Depeche Mode have probably sold millions more records in their career than Jimi Hendrix has sold… so how come they have heard of the one and not the other? I asked Ollie, one of these kids and with us on a Sandwich Placement year, if there was a band in his life who had changed EVERYTHING and completely shifted his musical thinking. He thought for a while, and then came up with Coldplay’s most recent album (the one I like the least). Mmm. He's 20 years old.  Maybe there is no hope.

David Cameron is a fan, apparently. I can’t help but think that he’s misunderstood it. Big Smiths fan too. Must have loved this photo, then.  Johnny Marr loved it..... 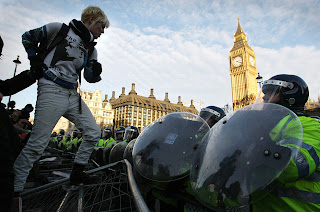 Actually, on the subject of idiot Conservative politicians, I got into a conversation with one of the other younger members of the team this week too.  She thinks that Boris Johnson would make an amazing Prime Minister..... as she's moving just up the road from me, I told her that she's forbidden to vote until she understands why this would be a terrible idea.  As C. says... the Athenians had it right all along by restricting the right to vote to those who knew how to use it....

This was played by a string quartet at the wedding I was at the other week, just after the ceremony and as the happy couple were signing the register. It took me a moment to place it, but when I did, my next thought was to wonder if it was really appropriate for a wedding. It’s about the break-up of a relationship, right? Still, Michael Stipe says he was always amazed to see so many snogging couples in the front of an R.E.M. gig when they played “The One I Love”, and that couldn’t be much more bitter a song. Nowt so queer as folk.

“Stuck With You” - Huey Lewis and the News

Speaking of snogging, there’s an article in the Guardian today about how the French have finally put a word for “French Kiss” into the dictionary. “Galocher”, which literally means “to kiss with tongues”. Actually, I think there was a french term for this already that was something to do with shovels, but why let the facts get in the way of a good story. My first kiss with the current Mrs Swisslet, of course, took place in the cafeteria at Tamworth Services and was soundtracked by this song. Good times.

“My God is the Sun” – Queens of the Stone Age

Album out on Monday and I’m now the proud owner of a ticket to the Saturday of the Download festival to watch QotSA along with the likes of Motorhead and Iron Maiden. That should be a good day, I reckon. QotSA at Rock City in about 2001 were one of the best gigs I’ve ever been to, and they weren’t too shabby at Glastonbury in 2011 either, so it should be a set worth seeing, especially if the new album is good. I’ve not seen a gig at Donington Park since I saw Thunder, The Almighty, Skid Row, Slayer and Iron Maiden at the 1992 Monsters of Rock Festival. Now those were the days.