if you stare too long you lose your appetite....

There's a massive poster up near my local supermarket. 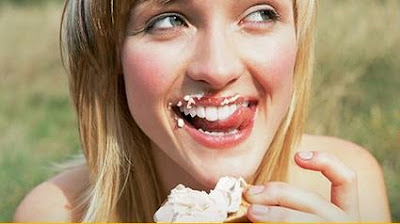 It features this image and the slogan, "Eat Like You Love".  It's an advert for Philadelphia Cheese.

I pondered this image for the minute or so it took to fill the car up with diesel the other day.  I was puzzled.  It's not that I don't understand what the advert is driving at.... I think that's fairly obvious... it's just that I couldn't really see who they were appealing to.

I'm just guessing here, but I would assume that the main buyers of Philadelphia Cheese are women.  I don't wish to gender stereotype - after all, I buy it and very much enjoy it on a bagel for my breakfast with some honey or with some smoked salmon for my lunch... but on the whole, I think it's fair to say that women make up their key market (not least because they do an extensive range of reduced and zero fat versions of their product).

Their old advertising certainly used to be targeted at women.  Do you remember the long-running campaign featuring those those two single women, and there was another one featuring some angels (here is the Australian version).   This new campaign features a photo of an attractive young woman licking cream cheese from her lips.  Is this an image designed to appeal to women or to men, would you say?  Is she perhaps an aspirational figure for female buyers of cream cheese?  Maybe.  I'm no expert, although I will say that this advert appeals to me more than any of their older campaigns.  I'm not sure it makes me any more likely to buy more cream cheese, but I certainly find it less cringeworthy.

That tagline though: "Eat Like You Love"?  In conjunction with that picture, surely the use of the word "love" in the strapline brings a wholly different connotation to the poster.

Nah.  Surely it can't be that.  Right?  Who in their right mind would want to equate their product with sperm?

Would that make the product more or less attractive to either men or women, would you say? Are they actively seeking to make that connection with the poster?  What conclusion are we supposed to draw from this?

Is there anyone alive - man or woman - who is going to be more likely to buy this product as a result of this advert and its apparent association of a spreadable cream cheese with blow jobs?

I'm saying it's not likely.  Unless perhaps they put the advert into Nuts magazine or something.... although I'm not sure that the Nuts demographic and the Philadelphia demographic has all that much crossover, to be honest.  It's not really MAN FOOD, is it?  Maybe the metrosexual male is all over spreadable cream cheese?  Wait... that sounds wrong.  Well, perhaps David Beckham eats it.  In which case, they should use him in their advertising.... would they have him licking his lips like that, do you think?  Would they (or he) dare?

What do you reckon?   Should I rethink my spreadable cream cheese provider of choice and transfer my allegiances to someone with a more enlightened (and certainly less Antediluvian) advertising strategy?
Posted by swisslet at 21:04