There was some kind of promotional stand in the office today. We have them quite a lot, but I can't recall one quite like this before. Picture this, if you will: I am strolling down the office to a meeting and I am confronted with this: 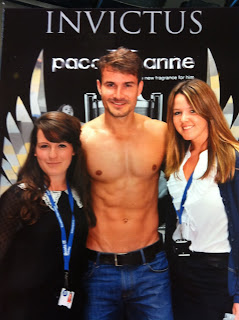 There is a half-naked man, with alarmingly low cut jeans, standing in the office having his photo taken to promote a new fragrance for men.  My two young colleagues, pictured above, naturally jumped at the chance of a photo and a quick grapple with a topless male model.  David - also pictured above - asked if I wanted to pose with him for a photo too, but I politely declined.    My colleagues were keen that I do it, but I'm really not sure that there's any need for that photo to be taken.  No good could come from it, so I made my excuses and left.

When I got back to my desk, I was unsurprised to learn that several of my other female colleagues had also taken the opportunity of having their photos taken with David, although I notice that they seemed to hunt in pairs: too shy to have the picture taken alone but more than happy to drag in a friend (perhaps to be cut out of the picture later).

I remarked upon this.  Emma (pictured above on the right) looked confused:
"Who's David?"
"David is the guy you are standing next to in this photo"
"Do you know him?"
"No."
"Then how do you know his name?"
"Because he introduced himself to us all as you were posing for that photo.  Were you not listening or was something else on your mind?"
"Oh..."
"...where is your other hand in that picture, by the way?"

I walked back down the office a little later on.  David was still there and still posing for photos, but he was now wearing a t-shirt.  Apparently someone complained and he had to cover up.

Presumably they complained about it being inappropriate to have a half-naked man in the workplace.  Perhaps they were offended at poor David being exploited.  Who knows.  We had Myleene Klass in the office a few months ago, plugging something or other, and you couldn't move for middle-aged men rubbing their thighs and trying to get close enough for a photo on the mobile phones held in their sweaty hands.  She was fully-clothed, but to be honest I found that far more distasteful than poor David standing around with his shirt off, but maybe that's just me.

I'm not sure it's something I needed to see in the office, and it's not really very enlightened or enlightening, but is it really something worth complaining about?  Is it sexist?  Probably, but would you be offended enough to complain?

Or would you just be in the queue for a photo and to try and cop a feel?

How do you end up with a job like that anyway?  Presumably they're an equal opportunities employer?