“There Must Be An Angel” – The Eurythmics

I've always liked this one, and I can remember listening to it in the bus on the way to a school trip somewhere back in 1985.  I think it might even have been a trip to Alton Towers or something like that.  The bit that sticks in the head the most?  That Annie Lennox warble, of course.

One of the great pleasures of listening to BBC Six Music as I get ready for work in the morning is that I'm often packed off with a tune like this ringing around my head.  Sadly, this morning it was some shite by the Mumfords, but you can't win every day, can you?

"One of These Days" - Gaz Coombes

This is just such a great song.  Supergrass were a good band, but this is at a completely different level of songwriting.  Not that there's anything wrong with Supergrass, it's just that this sounds so much more mature.  I guess even the guy who wrote "Alright" is getting older too, right?  This is properly good, I think.  Still rocking the sideburns though, I see.  Good man.

“I Should Live in Salt” – The National

I love the National, and they're one of those bands that just seem to get better each time you listen to them.  Matt Berninger just has the richest, softest voice and I'm absolutely loving the new album.  I should live in salt is a great phrase too.  Biblical allusion?  Who knows?

Interesting to see that Billy Bragg felt the need to come out in the press to defend the left-wing credentials of the Glastonbury Festival this week, in the wake of some comments by Richard Hawley.  Yes, it is a vast and increasingly corporate sponsored festival, but you don't have to go very far from the main stages before you start to find some really interesting politics.  As I do every year, I will be spending a fair bit of time in Billy's own Leftfield tent, not least to see the man performing himself.  You don't have to watch Mumford&Sons, you know.  Speaking of pop and politics, this song, of course, is a Woody Guthrie cover version....

One of my colleagues plays the bass guitar.  He's in his 40s, and his quite a music fan.  I was somewhat surprised, therefore, to discover during a conversation about great bass breaks in music, that he apparently is not aware of this song.  Never mind that beautiful, supple bass run towards the end of the song, it seems astonishing to me that he hasn't ever heard this song.  Can that be possible?  Does this mean he's unaware of the marvellous Chevy Chase performance in the video too?  Easily remedied, but goodness me....

I've been listening to "Way to Blue: the Songs of Nick Drake" a lot this week.  It's an album of cover versions of Drake's songs by people like Green Gartside, Vashti Bunyan, Robyn Hitchcock and Teddy Thompson.  It's very good, but what really stands out for me is quite how good the original songs are, and quite how good Nick Drake's original performance of them was.  Nothing against the versions here - they're excellent, on the whole - it's just that it's given me a new appreciation of quite how good the original songs were.  I love Nick Drake.  I discovered him by accident at a second hand record fair when I was at University, and he's my go-to music of choice for a quiet evening, including a memorable visit to the Saturnalia hot springs in Italy.  I bought a box set of his albums in France, actually, and it came bundled with a DVD which I haven't ever got around to watching.  I really must remedy that.  Soon.

"Strangers in the Night" - Frank Sinatra

I'm off to the Download Festival tomorrow to trial my new Glastonbury rigger boots in the mud and also to watch a few of my favourite bands.  Mik and John and I all went to the Monsters of Rock Festival at Donington back in 1992 to watch Iron Maiden headlining, and we're going back tomorrow, some twenty-one years later to watch the same band play more or less the same set as they did then (the "Maiden England" tour they're currently playing is based upon their 1988 set with a few later classics like "Fear of the Dark" thrown in for good measure).  As everyone knows, Iron Maiden were one of my first loves and I'm really looking forward to seeing them again.  The gig is also a chance to see Lemmy in the flesh for the first time and to catch QotSA - always a pleasure and the new album is good - and also to see Alice in Chains (well, what's left of 'em) for the first time.  The forecast is dodgy, but I'm a Glastonbury veteran and I'm not afraid of a bit of mud... especially when I'm only a short bus ride away from my own bed.   Hmm.  Do I have any rock clothes in my wardrobe anymore?  I do still possess a Number of the Beast t-shirt, but I was thinking perhaps of Sonic Death Monkey?  The umlauts seem especially apt. 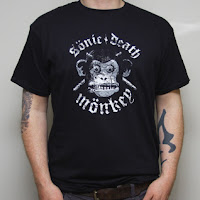 Have a good weekend, y'all.