you can fight the sleep but not the dream.... 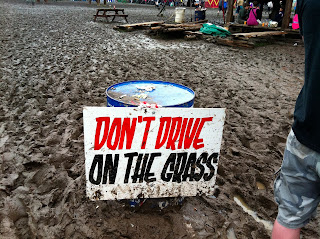 At about this time of year, a few thousand people begin paying very close attention to the weather forecast of a very specific place in Somerset.... Yup.  It's the Glastonbury Festival next weekend.  It is perhaps the most famous festival in the world and many amazing things have happened here over the years, but you know what most people think about when someone mentions the festival?

The mud.  Apparently even the Queen does it when someone mentions the festival in conversation. 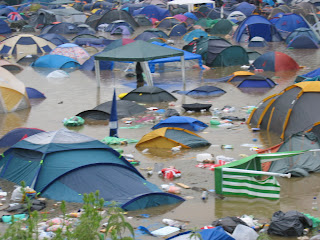 There's a very good reason for this, of course: the festival takes place on a farm, and when it rains, it gets very wet.  With 150,000 people tramping about the place, it doesn't take very long for the site to turn into a quagmire.  It's not so bad really: it makes getting around the place a lot harder and slower, and it's next to impossible to find somewhere to sit down... but as long as you have a decent pair of boots and a sense of humour, it's perfectly manageable.  Well, unless perhaps you wake up to find your tent floating in the same lake as some portaloos, as happened to some poor souls in 2005 (pictured above). 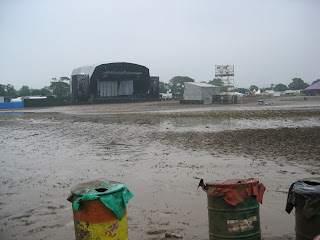 The fact is that Glastonbury enjoys almost saturation (!) media coverage when it is on: it's all over the BBC, for starters.  Although I think people like the pictures of people basking in the sun at a festival, I think they really enjoy the pictures of people slogging through the mud much more.  There's a kind of perverse pleasure watching other people suffer in the swamp when you're at home in front of your telly, isn't there?  Perhaps it feels even better if you're one of the thousands of people who tried to get a ticket and failed.  I'm fairly sure it does. The Germans have a word for it: schadenfreude. The pleasure derived from watching other people suffer.  Everyone wants to come to Glastonbury after a sunny one; very few people fancy it when they see a muddy one. 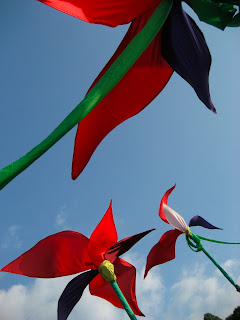 Honestly, it's not that bad.  I look at the weather forecasts the same as everyone else, but I tend to take mostly the same stuff every year anyway.  What's the worst thing that can happen?  That you lug your boots in and you turn out never to need them?  It is what it is, right?  I already drive a small, diesel car in a one-car household, recycle all my paper and cardboard and have no children.  What more could I realistically do to try and slow down climate change?

2013 will be my eleventh Glastonbury in all, and my tenth in a row since 2002 (no festival was held in 2006 or in 2012).  In all that time, I think my weather tally is two really gorgeous, sunny festivals, 3 really wet and muddy ones, and all the rest have been somewhere in-between.  The only conclusion I can draw is that it is entirely typical of the English climate that the weather in Somerset at the end of June to be a little bit wet, a little bit sunny, a bit windy and perhaps a bit chilly at night.  Indeed, that's pretty much exactly what is forecast this time around.  It's the kind of weather where you catch a bit of sun on your nose whilst wearing your wellies and your raincoat all day.  People have been moaning about the sunshine and showers we've been having over the last few weeks and saying how it's unseasonable.... well, I'm not sure that it is, really. 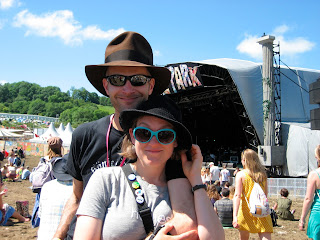 Anyway.  When it's nice, it's one of the most splendid places in the world.... whatever the weather.  As long as you're with the people you love, right?

....and you have some cider.  I'll be there first thing on Wednesday morning, rain or shine, and I can't wait.
Posted by swisslet at 21:08