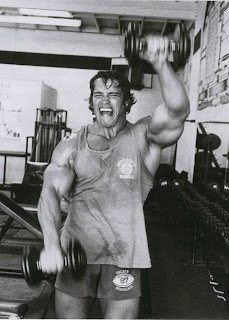 The comedian Daniel Kitson has a theory: there are some things that, whilst they don't automatically make you a dickhead, they're definitely a step in that direction.  A tick in the dickhead column.  The specific example he gave was having a personalised numberplate: owning one, he reckons, doesn't necessarily make you a dickhead, but it's a tick in the dickhead column.

I like this theory.  Now, I've long been suspicious of people who pump iron.  As my physique no doubt already says far more eloquently than I can, I don't spend a lot of time lifting weights.  In fact, generally speaking, I only really ever use my gym membership to make use of the swimming pool.  When I do venture out onto the main floor, however, I usually fill those tedious miles on the treadmill by marvelling at the kind of person who lifts weights.  I'm not one to generalise, but they do seem more average than most people to be wearing inappropriately tight lycra and a tiny vest, resting their protein shake on their beer guts as they preen themselves in front of a mirror, flexing their massive, swollen shoulders, arms and pectorals.  Pumping iron doesn't mean that you're definitely a dickhead, but I'm pretty sure it's a tick in the dickhead column.

As I attempt to get my poor, broken body back onto the road, I have sadly been forced to add some weight training of my own to my exercise routine.  It's nothing much: just some squats holding some dumb-bells to flex and strengthen the ITB in my left leg, some one-legged work on the quad press to build up my weaker left quadricep and a weird, standing on one leg type activity with a pull cable to stabilise my left knee.  I'm not pushing anything heavy, either: just a couple of 7kg dumb-bells for the squats, 20kg for the quad press and an entirely token 5kg on the cable to provide a bit of resistance.  That's more than enough for me as I'm looking to strengthen and stabilise, not bulk out, but it is somewhat smaller weights than the average testosterone fuelled macho pinhead likes to be seen lifting, that's for sure. 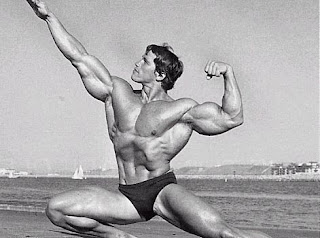 There seem to be some unwritten rules: apparently it's okay to fill the floor around your feet with loads of dumb-bells that you aren't actually using because you plan to use them at some unspecified later point.  There's more too: on several occasions now, I have approached an empty piece of kit and started my own exercises when someone has come up to me from nowhere and told me that they hadn't actually finished using it yet.  As there was no sign of anyone anywhere near the machine when I sat down, and no sign of a towel or waterbottle or something like that, I had made the innocent assumption that the machine wasn't in use.  Apparently, that's not how things work, and after about a minute or so, I am approached by an angry looking meathead wanting to know why I have jumped onto his machine and adjusted it for puny weights.  I think you have to scent mark each machine or something to stake your claim.  For all I know, perhaps you have to piss on it AND lift three times your own bodyweight.

So, in conclusion then: pumping iron doesn't definitely make you a dickhead, but it's definitely a tick in the dickhead column.

As a skinny runner, there's clearly nothing for me here.
Posted by swisslet at 19:09