what chance have you got against a tie and a crest?

I left the office today for a couple of hours to present an award on behalf of my company.  I mentioned this the other day to the colleague who sits just next to me.  I've known this lady for several years now, and on hearing this news, she looked at me for a moment or two, chewed it over and said, "Look, I'm not being funny or anything, but who the hell are you?"

The event was a prize-giving that immediately followed the graduation of some students from Nottingham Trent university.  These guys have just finished one of those degrees where they juggle their coursework with a full-time job in placement with a company.  Over the years, we've had many of these guys working in our department, and for the last few years, I've been their mentor.  My company sponsors one of the awards - best performance in the final year - and they were good enough to ask me if I would hand out the prize - a cheque for £250 - on behalf of the company to the lucky winner.

Neither of my two guys were the winners, but they've worked so hard over the last couple of years and it has been a real pleasure watching them develop and now to watch them graduate.  It was also a slightly bittersweet moment as my company isn't taking in any more of these students as they have decided to focus on apprenticeships and Year in Industry placements instead.  I'm involved with those too, but it was this scheme that first got me involved with what HR like to call our "Talent Pipelines" and that showed me how much more rewarding this sort of stuff is than my day job.

I had to get dressed up, of course.  It was a pretty hot day to be in a suit and tie, but I managed.  I had a slight dilemma this morning when I realised that my chosen shirt was rather limiting my tie choices.  I don't like to wear ties and most days I don't bother, so not surprisingly my choices are a little limited.  In the end, I plumped for my old school tie..... never something I do lightly as I don't remember my school days all that fondly and would not want anyone to see my choice of tie as signalling my approval for my school or for anything it represents.  Nor do I want to be seen as the kind of person who wears an old school tie.  I take a lot of pride that most people don't see me as privately educated and are surprised when they find out that I was.  Advertising my education through my choice of tie seems to go against the grain.....although you will notice that, for all my high principles, I still have my old school tie in my wardrobe. 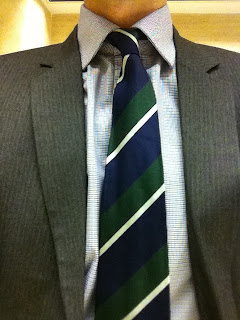 As I feared, it was commented upon almost immediately after my arrival in the office.

"Oh, that's a nice tie.  Next, isn't it?"
My old school was founded in 1567.  The first Next shops opened in 1982.  I'm pretty sure this isn't what the school were going for when they chose these colours.  I was horrified to find that, although I was amused by the remark, I was also slightly insulted.  Maybe I am a snob?
That wasn't the last comment either:
"Oh, have you been at Wimbledon?  Were you a match referee or something?"
Someone else wondered if it was a Nottinghamshire CCC tie that I'd picked up at Trent Bridge last week.  Well, I am a member, after all.
etc.etc.

Not a single person picked it out as my old school tie.  Nobody offered me a job in the City or anything, not even at one of the smaller investment banks.  Perhaps I'll wear it tomorrow and see if I get asked to become a special advisor at Downing Street or to the Treasury or something.  I feel more powerful wearing it, so surely it's only a matter of time before someone recognises it for what it represents and accords me the appropriate respect immediately.

Not wearing this tie has clearly set my career back immeasurably.  I see that now.
Posted by swisslet at 19:30