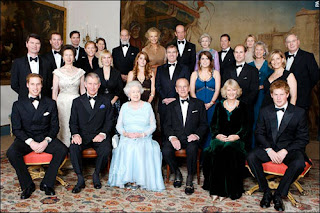 My wife and I went for a lovely bike ride together yesterday.  Rather than dwell on the unfortunate collision that saw C. catapulted into the canal and that sent me sprawling across the towpath, both of us picking up various grazes, cuts, bruises and possible cracked ribs... rather than dwell on that, I'll tell you about something else we saw along the way.

About an hour before the incident we won't be discussing, to be exact.

We were cycling through Wilford.  Wilford is a nice enough little village just down the river Trent from Nottingham.  Well, it's a bit grand calling it a village, really.  Nowadays it's a collection of housing estates of various ages.  It's pleasant enough, and has a village green and a reasonable pub that's nice for a pint on a sunny day, although not as good with food as it used to be.

As villages now seem to do, they've got a website too (google it for yourself...if they're going to ego surf, then they can at least do a bit of work for the trackback).  It has the name of the local bobby and various local interest news stories - in this case mostly about the various traffic schemes that are taking place in the area to widen the A453 and to close Wilford Lane for the tram works.  They also have a little widget on their homepage that tracks the price of petrol against the price of oil and the cheapest local petrol station to buy it.  You know the kind of thing.  Conservative MP, conservative residents, with a small "c".  Oh, and a Facebook page... where they seem to mostly be arguing about the shoddy standards in the pub, someone's overgrown hedge and some vigilante who is spray-painting around dog poo that isn't being picked up.  Exciting times!  Good luck to them, I say.  Community is good, right?

Anyway.  I digress.  What caught our eyes as we cycled through the village green was that someone has put up a sign celebrating the birth of a new heir to the throne.  Wilford Village, it seems, were keen to share in the joy of the Duke and Duchess of Cambridge and to let the world know it.  Now, I'm not in the least bit excited by this kind of thing and don't really understand why, in this day and age, people seem so ready to accept that some people are just BORN better than others.  Still, each to their own.  What I can't abide though is the inaccuracy.  Unless that sign has been there since 14th November 1948, then surely the heir to the throne hasn't been born, has he?  I'm not a fan of the family, so perhaps I'm a little rusty on how this all works, but wasn't the new royal born a few weeks back third in line to the throne?  Charles then William then this one?  Surely any royalist interested enough to put up a sign would know that much, at least?  An heir, perhaps... but then again, aren't we all probably an heir to the throne of somewhere if we went far enough back in our family trees?  Hell, if Henry Tudor can be king, then you clearly don't need MUCH of a claim, do you?  Just a good army and an act of Parliament and you're in.... 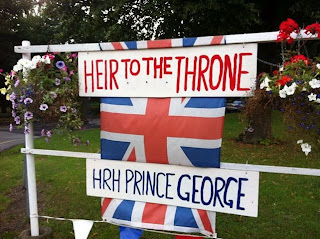 Or perhaps it's a statement?  An anti-Charles protest of some sort?  Now, you might not be a big fan of the current heir, but if you're going to support a hereditary monarchy, then I'm afraid you don't get to choose the order of succession.  Well, you could take the parliamentary route and chop off Charles' head, I suppose.... but think of all the lost tourism!

Other than that, you're just going to have to lump it.
Posted by swisslet at 20:32

Email ThisBlogThis!Share to TwitterShare to FacebookShare to Pinterest
Labels: history and stuff, insightful political analysis, trust me I'm an historian