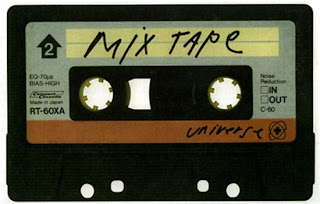 I really like making and listening to mix tapes.  I still call them that, although the last time I made an actual cassette compilation is probably at some point in the late 1990s.  Back then, I used to exchange tapes regularly with a schoolfriend at a different University.  There's just something so personal about putting together a playlist of the music that you love and sending it out to somebody and hoping that they will love it too.  I seem to remember that one of the tapes one of us made was called "Michael Hordern Is Dead", which dates it at around 1995.  I remember that John was slowly discovering Bob Dylan's back catalogue and David Bowie's work that went beyond the Greatest Hits albums we probably both had because we were members of the Britannia Music Club.  Meanwhile, I was probably sending him tapes filled with Scott Walker and various Britpop no-hopers.

It's precisely because putting together a playlist is so personal that people -- let's face it, guys -- use a mix tape as their first, clumsy attempt to impress a girl.  I was no exception, and I can remember carefully crafting a tape at the back end of 1995 for precisely that reason.  It worked, but I can remember finding it again a couple of years later and cringing at the crass obviousness of my song selections.

I suppose the whole process has got a lot easier over the years.  I had a mini disc player for a bit, but the advent of MP3s and iTunes and readily downloadable content has made the putting together of a playlist a doddle.  You can even fiddle about with the track order and give it a few experimental listens before committing it to disc.... if you even bother putting it on a disc.  I listen to lots of my playlists on shuffle, neatly rendering any careful tracklisting pointless.

Shuffleathon (based on an original idea by the wonderful YokoSpungeon!) was fun for a while, but it was just exhausting trying to coordinate people to try and send each other CDs and to then put up a review.  I've not entirely ruled out doing it again one day, but for now my mixtaping is restricted to my own running playlists and the odd mix I put together and burn onto CDs for my friends.

I was asked by a friend if I would send her a CD a couple of months ago: she was desperate for new music and she sent out an SOS.  As always, I loved the whole process of picking out songs, crafting a playlist and nibbling out the running order until I was happy with it.  I love the feedback I get, hopefully turning someone onto something they hadn't heard before... but the sad truth is that I also get a lot of pleasure from listening to my own playlists too.  All songs I've heard before, of course, but the particular mix is unique.  I name the playlist after the person I made the CD for, and when I listen to that playlist, I think of that person.  Hopefully, when they listen to it, they might spare me a thought too.

Actually, the person who asked for that CD has just asked me a favour: she's asked if -- should anything happen to her -- I would make a mix tape up every year for her daughter.  I would be honoured, of course.  Is there any greater honour and responsibility than that... although I did propose that I should perhaps make one up every year, starting immediately.  That way nobody has to die first.  I can't say I've much experience putting together a playlist for a five year old, but I've loved the challenge and reckon I might be able to get something into the post in the next couple of days.  I look forward to the day when this fine young lady starts sending me CDs and educating me on what I should be listening to.

I've said before that I sometimes feel like a musical fraud, with a trainspotter's urge to know and to catalogue rather than a genuinely felt love.  I still fear that might be partly be the case.  What is definitely true is that I get an enormous amount of pleasure from sharing music.  After all, happiness is only real when shared, and is there any greater happiness than a really, really good song.

Ideally, a really miserable song, mind.   Music makes me happy to listen to it, but surely everyone knows that very little good music ever came out of happiness.
Posted by swisslet at 18:17