all the power's in the hands of the people rich enough to buy it... 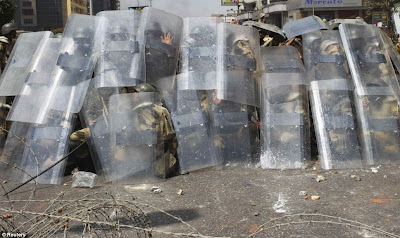 After months of unrest and violence, escalating in the wake of the removal of President Morsi at the beginning of July, Egypt has declared a state of national emergency.  The Foreign and Commonwealth Office is advising that, "In view of continued unrest and the evolving political situation in Egypt, the FCO advise against all but essential travel to the rest of Egypt".

Sad, but also fairly predictable.  When C. and I were looking around for a diving holiday at the start of February, we considered Sharm el Sheikh, but decided instead to go to the Canary Islands.  The Red Sea resorts were supposed to be okay then, and the FCO has specifically excluded them from their current advice not to travel to Egypt... it's just that we decided that it didn't seem right to be enjoying a luxury resort in a country when people were fighting and dying in the capital.  Lanzarote might not have been as hot as the Red Sea at that time of the year, but my lily-livered, Guardian reading liberal conscience slept a lot sounder.

I have a 23 year old colleague in my office called Emma.  She's training to be a project manager and she's hard-working and tenacious and all of those good things.  She also has a lovely air of, if not exactly naivety - that would be going too far - then definitely innocence.  She asks the most remarkable questions in the most unguarded way.  She's not stupid, but she's also not very worldly and isn't afraid to say the most astonishing things.  She asked us the other day to confirm that gravity had nothing to do with magnetism, which we were clearly happy to do.  Schrodinger's cat fairly blew her mind, and she also seemed to struggle with the idea that the Earth is a planet and not a star, no matter what it looks like in the sky in that photo taken from orbit around Saturn.  As I say, she's not stupid by any means, but she's quite innocent and not afraid to ask questions about all sorts of things that she doesn't understand.  She's lovely, actually, and she's a good person to have in the team.

Anyway.  A few weeks ago, Emma was looking to book a holiday for October.  One of her friends was suggesting Sharm, and she wanted to know what I thought.  I told her that, although it was probably safe enough, I would book elsewhere and outlined my reasons why.  She looked thoughtful, and then when I saw her next, she told me that she had booked that holiday in Egypt.  She then proceeded to spend an awful lot of time, every single day, fretting about the political situation in Egypt and wondering if everything was going to be okay and if she was covered by her insurance if she had to cancel.  You can well imagine that today she's been going out of her mind about it.
"If you're worried, then why did you book it?"
"Well, it was really cheap".

I suppose there's no arguing with that kind of logic, is there?  I have to admit that I wouldn't feel comfortable sat in my all-inclusive resort - no matter how cheap - as people die in violent clashes with the security forces in the country around me.  Even less so now than when we were booking that trip in February.  I suppose that's a conscience I can afford to have.
Posted by swisslet at 18:15