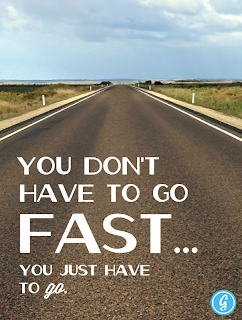 If there's one thing sure to make you feel your age, it's going out running with someone much younger and fitter than you are.  I make no claims to be especially quick as a runner, but I generally hold my own at Running Club: I'm not the very fastest, but I'm usually at the front end of the pack.  I generally seem to run a little faster when I run with other people.  I don't really know why this is - perhaps I'm inherently competitive.  Whatever the reason, the basic fact of the matter is that I seem to run about 15-30 seconds faster per mile running with other people than I do when I'm running on my own.

My running buddy at work is just back from maternity leave and we're just taking the first tentative steps to get her back into the running saddle after 18 months away.  We used to run two or three times a week at lunchtime from the office, and at our peak, we would run at a pace of around 8.15-8.30 minute miles.  I normally start slow and speed up as I go along, with the back half of my run quicker than the front half and the first mile my slowest and the last mile my quickest.  My colleague is the other way around, and between the two of us, we both seemed to run faster, towing the other along through our slower patches.  She's maybe a couple of years younger than me, but we're pretty evenly matched.

When she stopped running when she was pregnant, and then disappeared onto maternity leave, I filled the void in my exercise routine by joining my Running Club.  I don't really run with other people, exactly, but having other people around seems to keep my pace high.  I'm friendly with lots of people there, but generally run on my own with my headphones in.

A couple of weeks ago, another colleague of mine asked if I'd run with her at Running Club one Monday evening.  She's been a member since before I joined, but she hadn't been for a long time and wanted me to show her the longer of the routes as she didn't know the way.  Yesterday was that day.  The planned run was a little over five miles, but Becky is looking to build up her mileage in the run up to September's half marathon.  I've been slowly (really slowly) trying to build my mileage back up after my injury problems.  I've been doing some extremely tedious gym work to try and bulk up my weaker left leg, and it seems to be helping.  I've gone from a single, miserable three mile run a week, to doing three runs totalling about 10-12 miles.  I haven't run five miles in a little while, but was keen to give it a go.  Why not?

Here's the thing: Becky is about 22 years old and weighs about 55kg.  I am nearly twice her age and thirty kilograms heavier.  As soon as we set off, I could see that she was just lighter on her feet and generally springier and perkier than me.  I felt distinctly leaden footed by comparison, all strapped up to protect the ITB in my left knee and scuffing my left foot as I began to drop my leg slightly as we went along.  Our half marathon personal bests are actually really similar: mine is 1:51:59 and Becky's is about 1:51.  She's convinced that my long legs give me the advantage, but the reality is that she towed me around most of the way last night.  With about half a mile to go, she actually significantly upped the pace and encouraged me to tag along, which I did... somewhat reluctantly.  As we reached some steps up from the canal towpath, with about 400m to go to the finish, she stopped.  I ran past her up the steps and left her tagging along in the distance as I opened my stride, using those long legs to good advantage.
"You can't stop there!  That's not the finish....."
We finished with an average pace of 8:35 minutes per mile, which is pretty much exactly the same pace as I averaged when I ran the half marathon last year in 1:51:59.  As Becky wants to break 1:50 this year, I told her she would need to find another 10 seconds per mile and she looked horrified at the thought.  Well, you generally run faster on the day, so it's more than possible.  She won't be towing me around, for starters....

Me?  I'm not running the half marathon this year.  Too old and too injured.  I don't like to give up like this, but the simple fact is that I don't think my body will sustain the training that would allow me to run that far.  Not this year, anyway.  Next year...... well, we'll see.  Becky will be a year older next year.  I'll still be old because I'm old already (at least as far as she's concerned), but my legs will still be longer than hers, so who knows?  I'd love to run a 1:40-something time. 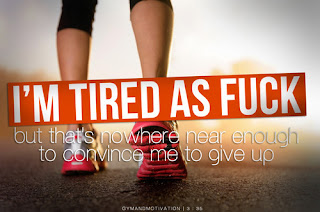 Note: probably not my legs....

Email ThisBlogThis!Share to TwitterShare to FacebookShare to Pinterest
Labels: exercise as therapy, old