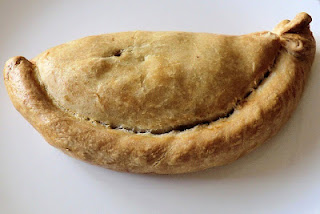 I promise I'm not going to go on about our trip to Devon all week, but I can't very well finish talking about it without mentioning the food, can I?

In a word: amazing. 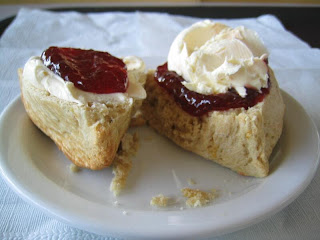 cream then jam or jam then cream?
Cream teas, obviously.  On the important question of clotted cream then jam, or jam then clotted cream, C deferred to me because my family are from Devon.  It's been so long since I had one that I'd actually forgotten how it was done.  Initially, I went for cream and then jam, but at the wedding in Tavistock, the scones were presented with the cream on top, which now I think about it seems to be much more sensible.  I can hear my paternal grandparents turning in their grave that I don't know this.  On the list of crimes in Devon, getting this wrong is probably only a little behind ordering a gin and tonic without using Plymouth Gin or asking for a "cornish pasty".  If it's anything like putting milk in your cup before the tea or afterwards, then one of these ways of putting a cream tea together is WRONG.  Which one, though?  Hmm.

Speaking of pasties, I had one of them too.  It was only from a little kiosk by the church in Widecombe-on-the-Moor, and it only cost me £2.50... but pound for pound it was probably the best thing that I ate all week.  As we sat there enjoying working our way through this massive heft of pasty, the kiosk was overrun by French bikers, on a roadtrip to the UK and extremely disgruntled by the picnic lunch laid on by the UK chapter of their club.  The guy we spoke to was muttering darkly about army biscuits with a strange liquid butter.  I think he was talking about a cream tea..... he was trying to order a cheeseburger, and was extremely sceptical when the lady behind the counter suggested a pasty instead.  C. intervened, and he sat down next to us and tucked in dubiously with his pocket knife and a fork.  Much to his surprise, he found it delicious, and was astonished to find that - apparently unusually for England - it was seasoned properly and was nice and peppery.

We ate well in our hotel too, both for dinner and with the full English breakfast each morning (and the St Austell beers were pretty good too).  The obvious highlight of the culinary week was our trip to Gidleigh Park... only two miles up the road from Chagford, but home to a two Michelin starred restaurant run by Michael Caines. 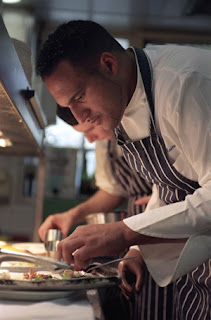 We had the eight course signature menu, accompanied by a "flight of wine", and for three hours we were able to sit back and enjoy some outstanding cooking and to enjoy the whole experience of having a sommelier explain the wine choice with every course.  It was amazing.   In fact, just so I can enjoy the thought of the meal all over again, here's the menu we had.

A delicious glass of properly good champagne accompanied by some appetisers (including a remarkable tomato consomme)
--
Warm salad of native lobster with a cardamon, lime and mango vinaigrette
served with a glass of Rias Baixas O'Rosal 2012 Terras Gauda
--
Terrine of foie gras with madeira jelly, truffled green bean salad
served with a glass of Mosel Riesling Kabinett 2011 Joh. Jos. Prum, Kabinnett, Wehlener Sonnenuhr (I'm no expert, but I thought this was the most harmonious combination of wine and food).
--
Cornish salt cod with Beesands crab, chorizo, samphire, tarragon and lemon puree
served with a glass of Seresin Chiarascura Chardonnay, Pinot Gris & Riesling 2009 Marlborough
--
Cornish duck with cabbage, smoked bacon, roast garlic, turnips and spice jus
served with a glass of Bergstrom Cumberland Reserve Pinot Noir 2010 Willamette Valley
--
Dartmoor lamb, boulangere potato and confit shoulder, fennel puree and a tapendade jus
served with a glass of Les Baux de Provence 2005 Henri Milan, Le Clos
--
A selection of South West Cheeses: Sharpham Elmhirst, West Country Cheddar, Little Stinky, Beauvale Blue
served with a glass of Port Lbv 2009 Quinta do Gaivosa (delicious, but a course made totally worth it just to hear a French sommelier explaining how the complexity of the port brought out the flavour of the "Leetel Steeenkee".)
--
Exotic Fruit salad: passion fruit sorbet and crystalline of pineapple
(it's always good to have a pre-dessert course, right?)
--
Plate of Apricot: apricot and almond nougatine parfait, apricot mousse and sorbet
served with a glass of Ruedera Chenin Blanc 2009 Stellenbosch.
--
Coffee and petit fours.

Words can hardly do justice to how good this meal was.  I preferred the white wines to the reds, on the whole, and I the foie gras and the salt cod were my two favourite courses, but it was a truly exceptional meal and I now want to go back as soon as possible with friends.  It's not an everyday kind of a meal, but once in a while it's a real treat.... not cheap, for sure, but still much better value than many of the restaurants in Nottingham.

I think I need to take more exercise to work that lot off.  Starting tomorrow, I'm going to cycle to work.  On top of everything else, obviously.  Now, if you'll excuse me, I have to learn how to fold up a shirt.
Posted by swisslet at 18:18