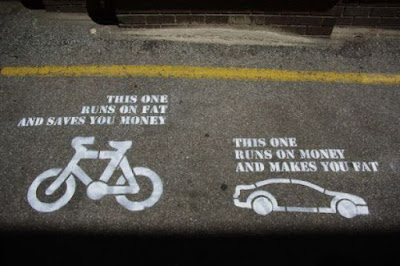 I cycled to work today for the first time ever.

I've sort of been meaning to do this for years and have never quite got round to it.  According to my new Garmin (thank you Running Club), from door to door, it's a mere 4.24 miles from home to office, and almost all of that is on dedicated cycle paths.  So why have I never cycled before now?  Well, because I take lots of other exercise and didn't think that this fitted in very well; because I car-shared with a friend and oddly felt like I didn't want to let him down.  It was actually my friend deciding to change jobs that was the final push to make the change.  Well, that and the Cycle to Work scheme that my office have just started participating in that means I was able to get a 42% discount on a new bike through a salary sacrifice thing that I don't really understand. 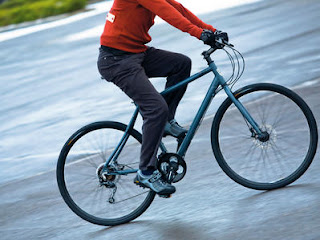 So the evidence of my advancing old age is piling up: last week I joined the National Trust, and this week I picked up a sensible new bicycle with a luggage rack and some panniers.  On Wednesday night, I carefully folded up a shirt and a pair of work trousers so that I didn't look like a scarecrow in the office, and carefully checked to make sure that I didn't forget anything obvious, like shoes or a pair of pants or something.   Then this morning, the whole thing took me a shade over twenty minutes.  Easy.  With all the road closures in Nottingham at the moment, that's probably not much slower than driving.  Plus my worthiness credentials are enormously advanced.

The trip wasn't entirely without incident, mind: I had a minor moment of embarrassment in the undercroft where I can securely park my bike.  I arrived a little after 8am, so there was plenty of space, but as I fiddled with my new D-lock, I dropped it on the floor and then had 30 seconds of trying to work out how to put it back together again.... all the while hoping that none of the more hardcore cyclists arriving would either:
a) notice what I was doing
or
b) scorn me for my stupidity.

I think I just about got away with it.

After work, I cycled from work straight to the gym for a swim.  Again, this is significantly easier than driving because the route is 3.79 miles (thanks again, Garmin) along a canal towpath instead of a hack directly through the centre of town.  After my swim (50 lengths), it was a mere 1.96 miles back home.

So, 9.99 miles of biking today.  Apparently that's an extra 579 calories burned.  Plus the swim and the leg exercises in the gym.  As if what I really needed to do was burn *more* calories.  I'd feel more virtuous, but I had fish and chips for my tea, followed by a treacle pudding with some clotted cream, so.....
Posted by swisslet at 23:18