As far as I'm aware, no actual comparative measurement of penis size happens in the changing rooms at work.  I've had a locker there for a while now, and I've never seen any, but it is split into two distinct halves with a wall separating them, so I can't really speak for the other side.

....there's plenty of virtual size comparisons going on, that's for sure.  I used to only really pop in there when I went for a run at lunchtime, and it seems the running crowd is pretty small and pretty quiet.  The cycle-to-work crowd is much more boisterous.  It's been pretty quiet when I've been arriving at 0630am, obviously... but at the other end of the day it's a completely different story and the place is full of people pulling on baboon-arsed lycra and talking large about how far and difficult their commute is.

There are a few guys in particular who seem to be training for the same event, a triathlon by the sound of it.  They're not in open competition, but they keep asking each other in vaguely passive-aggressive ways about how much training they're planning on doing when they get home, and then trying to go one better.  I've learned an awful lot about swim times and how having the slower swimmers start first might affect overall planned times.

"Yeah.  If anything the swimming used to be my weakest of the three events, but if anything it's now the strongest."
"I really struggle to drive myself on the bike.  I can go flat out in the pool or running for ages, but on the bike I just seem to sit back after five minutes."
"Have you got tri bars?"
"Of course.  I'm fitting them when I get home."
"Have you used them before?"
"No, but what's the worst that can happen?  I can always put them on and not use them..."

They're not actually comparing penis size, but they seem to be edging towards it.  Naturally, they all have very impressive, expensive looking bikes, team branded lycra kit and sunglasses that they seem to wear in the gathering gloom of a late Autumn evening. 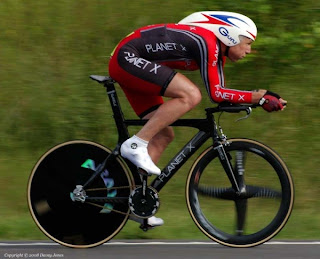 You know the sort, right?

.....and then one of them mentioned this evening the race that they're all training for: it's a super-sprint triathlon.  400m pool swim; 17.6km bike ride and 5km run.  Nothing to be sniffed at, certainly and well worth doing, for sure.  I've done the very same course myself and enjoyed myself enormously.  But is it really worth bragging about?  It's hardly an Iron Man, is it?

Put your junk back into your lycra, boys and put your rulers away.  For goodness sake.  Do you think this kind of thing would happen in the women's changing rooms?  Why can't *we* talk about Channing Tatum just once in a while?
Posted by swisslet at 19:09