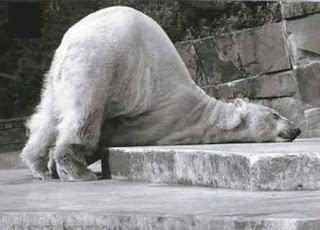 I just wasn't feeling it today.  Another early start to be at the office for 0630, and although I'm enjoying biking to work, I'm ten days in now and I think the extra exertion is starting to take its toll.  400-odd extra calories burned per day, plus all of my normal exercise.... I'm knackered, and I rather suspect that calories out are somewhat greater than calories in at the moment.

Today I went running at lunchtime.  I usually do on a Wednesday.  As the morning wore on, I began to dread it.  The bowl of cereal I had at 6am seemed an awfully long way away.  Still, I went.  Of course I went.  Today I was running with Becky, who is about twenty-two years old and sickeningly full of spring, running with a bouncy step and a swinging pony tail (C. thinks I run with a whole gaggle of pretty young blonde things.  Well, Becky has dark hair, so there....).  Our best times over a half marathon are actually almost exactly the same, and when we've run together before, we seem to go at about the same pace.  Even so, if ever there was a day when I wanted to go at my own pace and to retreat into my own shell without being dragged along by someone else, it was probably today.

I injected last night.  It's a bit of a lottery how much this affects me physically, but generally I'm okay.  Today I felt a little heavy-legged, and we were only a few metres out of the door before I realised that this was going to be a bit of a slog.  Before long, I really felt as though I was dragging my left leg and holding Becky back from the pace she really wanted to run at.  I wasn't much good at conversation either, as I was too busy trying to hold myself together and to keep up a reasonable speed.  Becky is running the Nottingham half marathon in ten days, and she's not really trained as much as she wants to and isn't sure if she's in the kind of shape to really challenge her best time.  She's only just started using Runkeeper to track her runs, and I spent a bit of time explaining to her that she could monitor her pace throughout the race and compare it to the pace she would need to run to meet her target time (she would love to run under 1hr50m, so that's a pace of about 8.38 mins per mile).  As I slogged along the canal towpath with her, I was acutely conscious of dragging her back.  The last mile in particular was horrible.

When we got back though, I discovered that not only had we covered the last mile and a half at a sub-eight minute mile pace, but we'd also just broken her personal best time for the loop.  Maybe the old boy didn't do so bad after all.

I also managed to do my quickest time yet on the cycle back from work.

Perhaps I'm not dead just yet. I might have an early night all the same.

And sausages for tea.
Yes.  Definitely sausages.
Posted by swisslet at 18:25