I was explaining to someone at work today how I spent my weekend, when it hit me: I'm suddenly quite tattooed now.  They'd wanted to see pictures, of course, and their reaction to the orca was one at shock that it was so large.  I've got four tattoos in all now, starting with a little tribal swirl on my right arm in Amsterdam in 2003, then the bear paw on my left shoulder in Banff in 2010 and now these two.  The orca is comfortably the biggest, to be fair, but maybe I just don't look the sort. 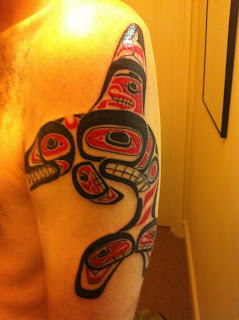 Actually, this is quite an intricate design, and the tattoo has to be that large in order to get all of the detail in without risking any blurring of lines that are too close together.  I will admit that it looked dauntingly big on Saturday morning when Giselle, my tattooist, showed me the tracing... but actually it sits around my arm quite nicely, and that beautiful fluked tail doesn't even dip below my normal t-shirt line.  I was much encouraged too by the reaction of my wife, who absolutely loves this one, and she did from the moment that the tracing was put onto my arm to be inked in.  Giselle did a fantastic job with this one, I think.  It's still healing, obviously, but I think it looks really good.

The whole process took about 3 hours.  If you've never been tattooed before, then I guess you wouldn't know what that feels like.  I compare it to a feeling a little like sunburn, never really going above 2 /10 on the pain scale, except when the needle hits a more sensitive piece of skin - in this case on the softer parts of the back of my arm or near my armpit - even then, it's never over a 3 / 10.  Watching a good tattooist at work is a real pleasure anyway, and I had a front row seat for this one. 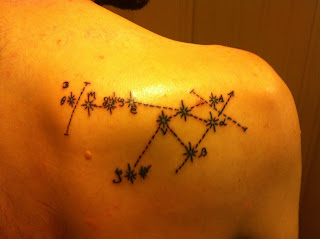 The other tattoo I had done on Saturday seemed to take no time at all and was all over in less than 45 minutes.  Unlike the intricate work required on the orca, this was relatively simple.  The story of both these tattoos can be found here, but this one is actually from a tracing that C. did of an old, hand drawn French star map showing the constellation Ursa Major..  The fact that she's had such a big role in the design of this one is really important to me, and I hope she's happy with the results.  If you look closely, you'll see that Giselle actually missed a greek letter designating the star Megrez off, which I noticed when applying some ointment on Sunday evening and I'll have to go back in a couple of weeks when I'm all healed for the 30 seconds that will be needed to add that tiny detail in.  No drama.  I'm really very pleased with this one already, anyway: it's a good size for my shoulder blade and I think it's worked really well from concept in my head to ink on my body with the fair hand of my wife involved in between.

I realise that tattoos are not to everyone's taste, but I'm comfortable with the ones that I have on my body.  They tell a story, don't they?  They tell my story.  I don't have anyone else's tattoos, I have mine.

Tell me about your tattoos - I want to hear the stories.  If you don't have one, what would you get?  Why haven't you?
Posted by swisslet at 22:14