I'm not really much of a gamer.  Over the years, I've played games on various platforms: Game and Watch, Spectrum, Amstrad, PC, Playstation.  Some games have held my attention for extended periods of time - Championship Manager springs immediately to mind, but so do games like Bard's Tale and Sorcery - but mostly I would describe myself as passingly interested.

I currently have a Playstation 3, but I only got it a couple of years ago and only really have a handful of games.  Some of them feature online play, but although my console is hooked up to my wireless, I've never really been tempted to get online.  Although I have played Call of Duty, I'm more of a one player kind of a guy, preferring to play games like Skyrim or Dishonoured, where you take a single character throughout and you interact only with the computer and not with other players. 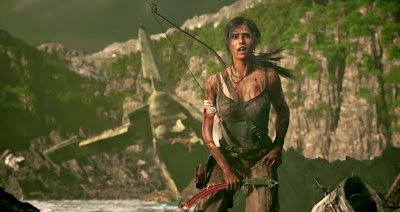 I'm currently playing the latest Tomb Raider.   I played the original trilogy of games on my Playstation one back in the day, and I loved the puzzle element: this was less of a shoot'em up and more the kind of game where you had to figure stuff out.  As time went on, the games became less about the puzzle and more about the action (and the size of Lara's chest), so my interest started to wane and I stopped playing.  The new game has gone back to basics, taking on an origins story and giving the player plenty of puzzles to solve.   It's good, but I'm finding it ultimately a little unsatisfying.  Why?  Because I feel as though I'm playing the game on rails, with my path through the action carefully plotted and where I only have the illusion of a choice about what I want to do.

I suppose I've been spoiled by Skyrim.  I've never played a game before - with the possible exception of Elite - where it is such a large and totally open world; where the path I choose to follow, the quests I chose to accept and even the people I choose to interact with are completely up to me.  In Skyrim, if you so desired, you could spend all of your time mining ore, smelting metal and then smithing and enchanting armour.  It's not really my thing, but that's pretty much exactly how one of my friends plays the game.  He's never happier than when he's got suits of matching armour arranged on stands in his house....and to think that people called me sad for spending my time becoming the head of the assassins' guild and robbing every tomb I could find!  After 400-odd hours playing in a game like that, a more tightly scripted game, no matter how good and how beautifully realised, somehow feels like a step down.  You might almost as well be watching a film.  I've got "The Last of Us" lined up next, and although it's supposed to be an incredible game, I fear it's more of the same: more cinematic than interactive.

Someone suggested I try the "Fallout" series (by the same development house that created Skyrim and Dishonoured), and Grand Theft Auto 5 is supposed to be pretty freeform.  I might try the former, but I'm sceptical about the latter.  I played Vice City quite a lot, and I found that the wandering around aimlessly waiting for a mission was not interesting enough to conceal the fact that I was waiting for the next main mission to start.  It's fun jacking cars and killing pedestrians, but there are limits to exactly how much fun.  Besides, it's never been the same since I found out that those women you gave money too in the game were not raising money for stem cell research.

One of my colleagues was remarking how a guy we both work with was a champion at some old-school game.  I was thinking Chuckie Egg or Manic Miner or Jet Set Willy or something like that.