ring the bells, wake the town, everyone is sleeping.... 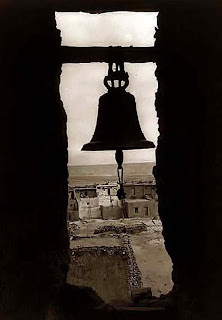 Who says I'm stuck in my ways?  Only this week I made a fundamental change that is having a profound impact on my life every single day, right from the very first moment I wake up.

Now, clearly I'm not suggesting that this is as stressful an event as divorce, bereavement or moving house... that would be ridiculous.... but it's surely in the top ten.  No?  Wouldn't you say?

You might think that the only important part about an alarm is that it wakes you up, not how it wakes you up... but surely the way you are woken up is absolutely critical to your mental and physical wellbeing: the transition between asleep and awake must be managed with great care to ensure that you can be as productive as possible during the day.  Naturally, in an ideal world we would all wake up naturally and get up in our own time, but in practice we all have places we need to be and don't have that luxury.  Hence the regrettable need for an alarm.  But who wants to be woken up with a jerk?  That can't be good for your heart.  Surely it makes more sense to be eased gently out of your slumbers to better set you up to cope with the stresses of the day ahead?

After many happy years contentedly using the classic "bell tower" tone, my head has been turned by the wide selection of new tones included as part of the upgrade to iOS7, and I've shifted to "cosmic".  It was time for a change, but a change like this is stressful and fraught with risk.  What if the new alarm tone had a negative impact on my day?  How would I cope?

Well, two days in, and it's really far too early to judge if the change has been entirely successful or not.  What I will say at this early stage is that the new alarm tone has already had a positive effect on my relationship: rather than dragging myself out of bed without a word and heading to the bathroom, now I have a thirty second conversation with my wife.  Sure, we only talk about what we think to the new alarm tone, but that's two mornings in a row now.  That has to be good, right?  We're both undecided on the new tone, but at least it's given us something to talk about.

The cat hates it.  She's made her preference for the old alarm tone abundantly clear.
Posted by swisslet at 19:01