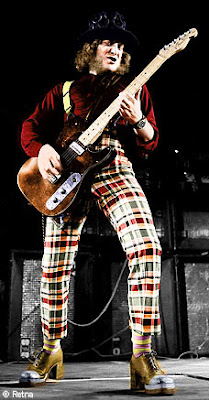 Experience, though noon auctoritee
Were in this world, were right y-nough to me
To speke of wo that is in mariage;
For, lordinges, sith I twelf yeer was of age,
Thonked be God that is eterne on lyve,
Housbondes at chirche-dore I have had fyve;
For I so ofte have y-wedded be;
And alle were worthy men in hir degree.
But me was told certeyn, nat longe agon is,
That sith that Crist ne wente never but onis
To wedding in the Cane of Galilee,
That by the same ensample taughte he me
That I ne sholde wedded be but ones.

I first came across this when I was about seventeen years old and studying towards an A-Level in English Literature.  I'd studied Shakespeare already, of course, and familiar with the language..... but that sounds mostly like the English that we speak now. Middle English, on the other hand seemed like a completely different language.

I got the hang of it before long, and it really helps if you hear it read aloud (and you can hear that bit quoted above read aloud here).  You just need to get your radar tuned in, and once you have, then the whole, bawdy world of the Wife of Bath's Tale and the rest of the Canterbury Tales open up before you.

The development of the English language is fascinating.  The Canterbury Tales was first published at some point around the end of the fourteenth century.

'The pronunciation of Chaucer's writing otherwise differs most prominently from Modern English in that his language had not undergone the Great Vowel Shift: pronouncing Chaucer's vowels as they would be pronounced today in European languages like Italian, Spanish or German generally produces pronunciations more like Chaucer's own than Modern English pronunciation would. In addition, sounds now written in English but not pronounced were still pronounced by Chaucer: the word [knight] for Chaucer was [kniçt], not [naɪt]." 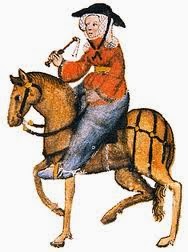 The book was the first known to be printed by William Caxton at his printing press in Westminster in 1476, and it was the setting down of books like this into print that began the process of the standardisation of the English language and the smoothing out of regional variations.  By the time Shakespeare was writing in the late sixteenth and early seventeenth century, the language was much more recognisably close to the one that we speak today.  (As well as studying the Wife of Bath for A-Level, I also studied Caxton and the printing revolution as part of my History degree.... I love this sort of stuff).

With all this in mind, I was fascinated to read this article on the Guardian website today.

Apparently, a school in Halesowen is trying to stamp out the use of the local Black Country dialect.  Well, if you've every heard Noddy Holder speaking or tried to wrap your head around any Slade song lyrics, then you'll know that the dialect in question is all ‘gonna’, 'Yow am', ‘woz’ or ‘it wor me’... not for nothing are people from this neck of the woods often called Yam Yams.  What I did not know, and what this article points out, is that this dialect and these pronunciations are the closest left in modern Britain to the language as it was spoken in Chaucerian England.

As the Sedgley Manor Dictionary (linked from the article) says:

"The dialect of the Black Country area remains perhaps one of the last examples of early English still spoken today.  The word endings with 'en' are still noticeable in conversation as in 'gooen' (going), callen (calling) and the vowel 'A' is pronounced as 'O' as in sond (sand), hond (hand) and mon (man).Other pronunciations are 'winder' for window, 'fer' for far, and 'loff' for laugh - exactly as Chaucer's English was spoken".

That's fascinating, right?  It's not just me?  Right?

Just as we are rightly doing our best to keep languages like Welsh and Gaelic alive, should we not also be preserving this too?  We certainly shouldn't be trying to actively stamp it out, anyway.

Funny what you learn, innit.  Every day's a school day.
Posted by swisslet at 20:38