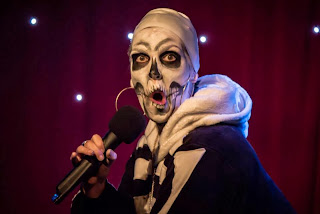 photo of Shirley Windmill by Jon Ellis at Cabaret Roulette

One of my dearest friends is a producer.  She has an actual job that pays her actual money, but producing is her real love.  A year or so ago, she started performing a burlesque act, and it was wonderful watching her blossom and grow in confidence as she found herself part of a wonderfully welcoming community of performers.  Not long after that, she put her own show together.  Perhaps the lure of producing was greater than the lure of the footlights themselves.

Cabaret Roulette launched in November 2012 with a simple goal: to shake up the cabaret scene by throwing out old ideas, empowering audiences and challenging artists to push beyond their comfort zones - all the ingredients for live performance magic.  Each show has a central theme, chosen in advance by the audience via the Facebook fan page followed by live vote. Eight carefully-curated artists , representing as widely-differing disciplines and styles as possible, then have two months to create a brand new act putting their individual take on that single theme. The show is called "Roulette" because we won't know where the ball lands until the night.  The model encourages creativity and risk: with just a hint of friendly competition, the artists are inspired to dig past the obvious and the done to create something truly fresh and extraordinary. And with no discipline duplicated on the night, the audience can expect an exciting, fascinating evening of true variety.

Previous themes have included things like Apocalypse, Fairy Tales, Asylum, Doctor Who and Ghost Stories, but just wasn't able to attend.  A Wednesday night at Madam Jojos in Soho isn't the easiest thing for me to attend, but I watched and enjoyed the whole thing vicariously through the eyes of my friend and her vibrant Facebook presence.  Perhaps I was there in spirit (GHOST CHICKEN!)

A few months ago, she did one of those startup things, trying to raise some money to guarantee the future of her little show; so that she could commit to pay her performers in advance without needing to wait for the returns from the door.  What started small was becoming bigger and more reknowned, and the quality and reputation of the performers was getting larger too, with bigger and bigger names in the world of Cabaret wanting a piece of it and begging to perform.  After about a second's thought, I decided that I was happy to put some money in.  Various perks were on offer, but much though I'm sure I'd enjoy nipple tassles or a fascinator, I was investing in my friend because I'd seen how much this meant to her and how much being involved had seen her blossom.  Above all, I believed in her and I wasn't afraid to put my money where my mouth is.  So, just like that, I became a patron of a burlesque show. 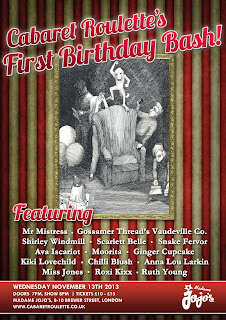 This week, I took a couple of days off work and went down to London to attend the first birthday show on Wednesday night.  The line up consisted of acts taken from each of the previous shows.  This was my first burlesque show, and I wasn't entirely sure what to expect.  I'm sure we're all familiar with the Dita von Teese style of cabaret with the giant martini glass... but Cabaret Roulette turned out to be so much more than that.  Sure, there was some traditional burlesque (with a trough rather than a martini glass), but we also had a stunning fire act, a comedy singer, puppets, dancers, Marilyn Monroe coming apart at the seams, a bellydancer, a drag zombie, a Weeping Angel, an urchin skeleton rapper....

.... It was amazing and I loved it.  You know what I loved almost as much as the acts themselves?  I loved watching my friend as she took it all in and I saw the joy and the happiness in her face.  That's all the return on investment that I needed.  The rest is just a bonus.

You should definitely go.
Posted by swisslet at 21:21