the cavalry with tea and sympathy... 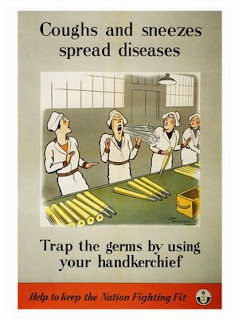 My wife is full of cold at the moment. As well as virtually losing her voice, she’s been coughing and snuffling and generally feeling under the weather. She had something of a rough night last night: a congested chest that made it hard to breathe, a blocked nose and a wracking cough. At several points during the night, she had to get up to take another batch of decongestants (herbal and chemical), to blow her nose or just to try and clear her aching head.

It was a difficult, disturbed night’s sleep, but somehow I managed to get through it….

Historically, I’ve generally been pretty resistant to colds. I used to put this down to my virtually superhuman fitness levels and my absurd consumption of fruit and vegetables… and then it turned out that I just had a super pumped up immune system that was about to start attacking my nervous system instead. You might consider this an upside of multiple sclerosis: widespread numbness, fatigue and muscle weakness, but hey! I don’t get many colds! Sadly, since my diagnosis, I’ve been injecting myself with an immuno-suppressant. This is supposed to dampen my excitable immune system down so that it doesn’t cause any more damage, but it’s entirely likely that chemically lowering my immune system may make me more vulnerable to passing germ bugs.

That’s certainly what the NHS thinks, anyway… that’s why I get invited to jostle with the old people in the waiting room to have a free flu jab every Autumn. As well as the annoyance and inconvenience of actually having a cold, the presence of the virus in your body causes your immune system to ramp back up to fight the invaders. When you have MS, having too many of those guys buzzing about your system increases the likelihood that they will get confused and find a juicy part of your brain or nervous system to attack instead.

I’ve been pretty lucky so far, actually. In spite of injecting Avonex every week since May 2009, I still haven’t had that many colds – although I had a doozy that lasted about six weeks in March this year – and I also haven’t had any significant advances in the progression of my MS. In itself, that doesn’t really show anything: I might not be having colds because the Avonex *isn’t* working, and I might not be having relapses because of blind luck… we’ll never know. As possible outcomes go, though, I’ll take this one, thanks. I know that much.

It’s injection night tonight, and rightly or wrongly, I always feel more vulnerable to infection straight after I’ve injected, so here's hoping that everyone has a better night's sleep tonight.  Well, whatever.  It’s not C’s fault she’s ill, is it?  The poor girl deserves some sympathy.  It's not my strong point, but I’ll do my best to give her a cuddle tonight instead of huffing and puffing (which apparently I even do in my sleep).

Well. I’ll try. It might be easier said than done at 3am, but I’ll try. If you don’t hear from me in the next couple of days, then I’ve probably failed in my attempt and C's killed me*

* That’s a lie. If you don't hear from me tomorrow, it's because I’m off to London for a couple of days.**

** …although, to be honest, she could still kill me there if she isn’t better and I’m no more successful with my attempts at sympathy.***

*** In my defence, my father is a doctor and he never took very kindly to any of his family being ill… unless they were seriously ill. If he was sympathetic, you really knew you were sick. I think I may have inherited some of my bedside manner from him.****

**** Although some of it is doubtless entirely me. I can’t blame the old man for all of it.  I've taken almost no time off sick in my whole career and I hate being ill.  Somewhat ironically for someone with a chronic medical condition, I think I equate illness - in myself and in others - with weakness.
Posted by swisslet at 19:42