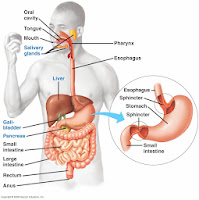 For reasons that I can’t even remember now, I found myself reading an article online the other day that discussed how long it actually took food to pass through the human gut. I forget the exact details, but the answer was something like “it depends”, but that essentially a good meal could take a good couple of days to work its way through your system as it is thoroughly processed through miles and miles of the alimentary canal.

Even though I had only stumbled across the page by happenstance, and there was quite a lot of detail, the article was interesting enough to hold my attention for at least long enough to pick up that small fact. Hmm. Interesting, I thought, and bumbled off randomly digging for other such treasures on the world wide web.

Little did I realise how interested I would soon suddenly be in that particular nugget of information....

I had leftover lasagne for my tea last night. My wife likes to brag about the quality of her lasagne, but in all the fourteen years or so that we have been together, I think she has only ever cooked it for me twice. This wouldn’t normal bother me all that much, except for the fact that I used to make what I considered to be a decent lasagne of my own, and her celebration of her own product made me feel like I couldn’t make it any more…. Meaning that I almost never eat lasagne any more.

Anyway. She made me a lasagne this weekend and it was delicious. As she was away in Italy for the first part of the week, I was delighted that there was enough leftover to have re-heated lasagne as a more than acceptable midweek tea.

“I’ve left the lasagne in the fridge in a glass container. It’s ovenproof, so all you have to do it to take of the plastic lid – which isn’t – and pop it in to reheat.”

Perfect (although I like to imagine that I’m not so much of a moron that I would put a plastic lid into the oven, but I suppose you never know…)

Yesterday evening, I popped the dish (minus lid, of course…) into the oven and set about preparing some kale. I like kale: it's a wonderfully dark and mysterious brassica. I wasn’t sure how long the lasagne would need to reheat, but figured that I’d give it a good half an hour or so at about 180 degrees. It’s not that big deal to eat lukewarm lasagne, but I’d popped a few fresh sheets of parmesan on the top, and I wanted the whole thing to be nice and crispy.

Imagine my disappointment when I went back to the oven to find that the ovenproof glass dish had cracked into four pieces. It looked to be otherwise intact, perhaps held together by the lasagne, so I took it out and tipped it upside down onto a plate to have a good look. I couldn’t see any glass, and the pieces of the dish seemed to fit together neatly enough, so after about ten seconds of consideration – I really, really like lasagne, and this was a really, really good lasagne – I decided to eat it anyway. Carefully.

It was tasty, but I had a nagging little doubt in my head. It’s really not a good idea to eat glass, is it? I’m a history graduate, and I’m pretty sure that more than one Pope met his end with powdered glass in his food. To ease my mind, I stood up and had a look in the oven…. There were little shavings of glass on the bottom. Not much, but more than enough to shatter my illusion that the container had broken cleanly. I sat back down and had another few careful mouthfuls, poking to the bottom of the pile to eat the crispy fresh parmesan layer that I put on the top before flipping the whole thing over. It was lovely, but my heart wasn’t really in it any more, and I now had visions of a slow and painful death over the next 48-72 hours as pieces of glass made a mincemeat of my upper and lower intestinal tract, causing me to gush blood from both ends.

I ate a bit more. I’d already eaten the bottom layer, so what the hell? I left a token bit on the plate just to prove to myself that I’m not a total idiot. I had a big cup of tea and some cake. Well, together with all the kale I’d eaten, that was just providing a sensible layer of padding to ease the passing of the glass through my digestive tract. I’m not googling that, but that’s pretty much science isn’t it?  I ate loads more cake today too, just in case.

So, if I die horribly in the next 48 hours, then you’ll know that eating food from a broken glass dish is a really stupid idea.

It was a really good lasagne though.

Maybe even worth it.
Posted by swisslet at 19:49