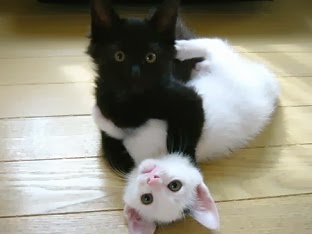 I had a meeting with my boss's boss first thing the other day.  It wasn't that big a deal really, but I did have to pull a paper together and then talk him through it.  Not a big deal, for sure, but certainly not no deal at all.  It went pretty well, I think.  Probably the most interesting thing that happened was that, at some point during the meeting, the penny dropped with this guy about how I was connected to my wife.

Apparently, he's a member of some "High Potential" group at work: some sort of collection of the best and brightest talents in the company.  You know the kind of thing [stifles yawn].  Anyway, at some point in the last few months, C. apparently came to give this group of bright sparks a motivational talk.  Presumably to inspire them to aspire to the giddy heights that she continues to reach and to tell them about the in-flight entertainment on the corporate jet she seems to use these days.  I find her presentational style a little stagey, but she seems to go down very well with audiences large and small and receives very positive press coverage as far afield as Russia and China.  A little closer to home, she seems to have made an impression on my boss's boss, anyhow.

This guy doesn't really know me all that well.  We're both relatively new in role, and we've only really exchanged small talk....and now he has realised who I'm married to.  What he means by "different", of course, is that he can't quite conceive of the fact that someone as exalted as her would be married to someone as lowly as me.

Well, that's his problem and I'm in no way emasculated by my wife's career just because it may be beyond his imagination that there is a life outside of work.  In any case, there's no great mystery about why my wife is more successful than me in this field: she's talented, driven and works very hard.  I'm not without talent and I do work fairly hard (-ish), but I simply do not have the same kind of drive that she does.  She might be a talented linguist, successful businesswoman, psychology student, classical guitar prodigy and rapidly improving fencer, but she's shit at computer games and can barely drink beer at all, so I think we're pretty evenly matched really.

But you know what?  She'd be NOTHING without me.  Nothing, I tell you.  NOTHING*.