I'm trying out a new pair of trainers. More than just a new pair of trainers, I'm trying out a new type of trainers.  I'm an over-pronator, which means I strike on the outside of my heel and then my foot rolls inwards (which looks horrible in slow motion as my ankle looks like it's going to give way).  This means that every running shop I have ever been in always encourages me to buy a pair of running shoes that have heavily built up heels and a big solid block on the inside edge of the sole to help neutralise the foot roll.  Makes sense, right?

Here's a pair of Brooks Adrenaline GTS trainers, the type that I have been happily using for the last three or four years.  Look - big chunky heel.  Bouncy and supportive.

I also have a very high arch on my feet, and when I started having problems with my plantar fascia, calves and ITB last year, a bio-mechanical assessment suggested that the arch in my left foot collapsed a little when I ran, resulting in one leg longer than the other and an assortment of knock-on mechanical issues.  I was recommended an orthotic - not custom made, but one that provided rigid support underneath my arches and a bit of extra padding under my heel to help protect me against the force of my heelstrike.  I've read about barefoot running, heard how it was supposedly really good for you and seen people running around in less and less supportive shoes, but I was putting more and more support into my running shoes and thought that it was never really something I'd be able to try without breaking myself permanently.

I've been having physiotherapy to try and combat the loss of dorsiflexion in my left ankle, and most of the exercises I've been given are all about strengthening the muscles in that ankle to try and combat the gradual weakening being caused by the wonky signals from my brain.  The exercises - things like standing on the edge of a step dipping down and holding the stretch for thirty seconds - are all visibly making a bit of difference to the mobility in my ankle. Not much, but a little bit.  This in turn is helping me *not* to scuff my foot when I run.

It was this focus on mobilising the joint that had me thinking about changing my trainers again.  The whole point of barefoot running is that is is supposed to take you away from a reliance on artificial supports and to force you to use your muscles and joints in the way that we always used to, back in the day when running was how we stayed alive: either running after food or simply by running away.  Coincidentally (or not), on a recommendation from super runner Abi, I've also started reading "Born to Run" by Christopher McDougall, a book that (amongst other things, including a bloody good page-turning story) questions how the rise of modern running shoe technology has coincided with a huge rise in running injuries that we simply never used to get.  Cavemen never worried about over-pronation, did they?

Hmm.  Thought provoking stuff.  I sought some advice from my friendly local running shop, who also of course run my friendly local running club, and they pointed me in the direction of some transition shoes: I'm not ready and may never be ready for zero support shoes, but a transition shoe will force me to reduce my reliance on artificial support and to change my running technique in a way that will strengthen my ankles and lower legs.  Sounds ideal, so I bought a pair of Brooks Pure Cadence shoes in a natty red. 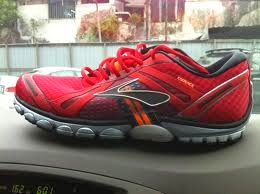 Just compare the structure and size of the sole with the Adrenalins above.

One four mile run doesn't really prove anything, but after taking them out for the first time tonight, I"ve already learned loads.  Most importantly, I've learned how much I've come to rely on a big, padded heel in my shoes... something I only discovered when it wasn't there any more.  Suddenly, I was pushed to have much more of a mid-foot strike and my whole angle of running changed subtly.  It felt a bit weird at first, but by the end I was really getting the hang of it.  These shoes seem great: they're light and make me want to almost run on my toes, but they are also supportive in key places: they have a band that supports the arch of my foot and a strategically placed ball on the sole that is designed to help prevent my foot rolling inwards as I run.  One run down, and I like them.

Maybe ask me tomorrow how I'm feeling and the answer might be different, but if this helps to strengthen and mobilise my weaker ankle, then it's entirely possible that taking support *out* of the shoes I run in may well prolong my time as a runner.  This is a good thing.

Long and boring post if you're not interested in the nuts and bolts of running, but I'm afraid that I am.  The harder running becomes for me and the more I start to realise how important it is to my mental as well as physical wellbeing, I'm afraid I'm just becoming more and more interested in this stuff.
Posted by swisslet at 20:13

Email ThisBlogThis!Share to TwitterShare to FacebookShare to Pinterest
Labels: books, exercise as therapy, we do not talk about running club, WTs