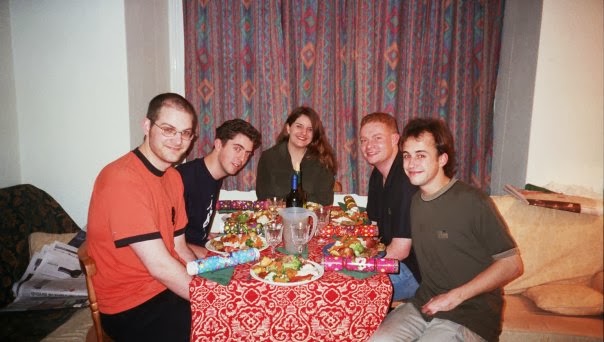 I turn 40 in a couple of weeks.  I'm not sure that it's a milestone that bothers me all that much, but if it did, then I'm pretty sure that a quick look at this picture would soon see me right.  I think my age is about the only thing I've got going for me here*.

* well, my age and my friends, that is.  I'm 16 years older now, but I still have a couple of those friends.... one of whom I have had the honour of calling my friend for more than thirty years.

Pretty soon after this photo was taken, I started taking a bit more exercise and the weight began to drop off steadily over the course of the next four or five years (and is still falling off now).  I reckon I probably weighed about seven stone (45kg or 100lb) more then than I do now.  I'm older, greyer and balder now... but essentially none the worse for that, I reckon.  Certainly not when compared to how I looked in my youth, anyway.

One of my colleagues was marvelling the other day that I was literally old enough to be her father because I'm about seventeen years older than her.  Well, technically that might be true, but I remember what I was like at seventeen, and I know that no woman of sound mind wanted anything to do with me.

Looking back, it's quite easy to see where they were coming from.

I'm not scared of being forty.  Being old surely can't be anywhere near as strange and scary as being young.   I don't think I'd be seventeen again for all the tea in China.
Posted by swisslet at 20:26