On Saturday evening, we had a lovely dinner with some friends at Alyn Williams at the Westbury in Mayfair.  We don't go out for dinner all that often, but when we do, it's nice to go somewhere really excellent.  Actually, we were really tagging along with the same couple who gave me the Serrano ham for my birthday (thus reinforcing their claim to be the *best* kind of people).  They were good enough to invite us, and as we weren't planning on spending Easter with our families, what better than to spend it with your friends?

Often, when we come to this sort of restaurant, I have the taster menu with an accompanying flight of wines.  I don't really know much about wine, but it's nice to hear the sommelier telling you about the wine and why it's been chosen to accompany each dish.  It adds to my enjoyment of the meal.... and as you're often having multiple courses, a glass of wine with each course soon adds up, and by the end of the evening, you can be rolled out of the premises.  It's all good.

This time around, because it was on offer, I decided to have a flight of beers to accompany my meal.  It's the latest thing, apparently, to pair excellent beer up with the food, and I was curious to see what they came up with.

Well, here they all are: 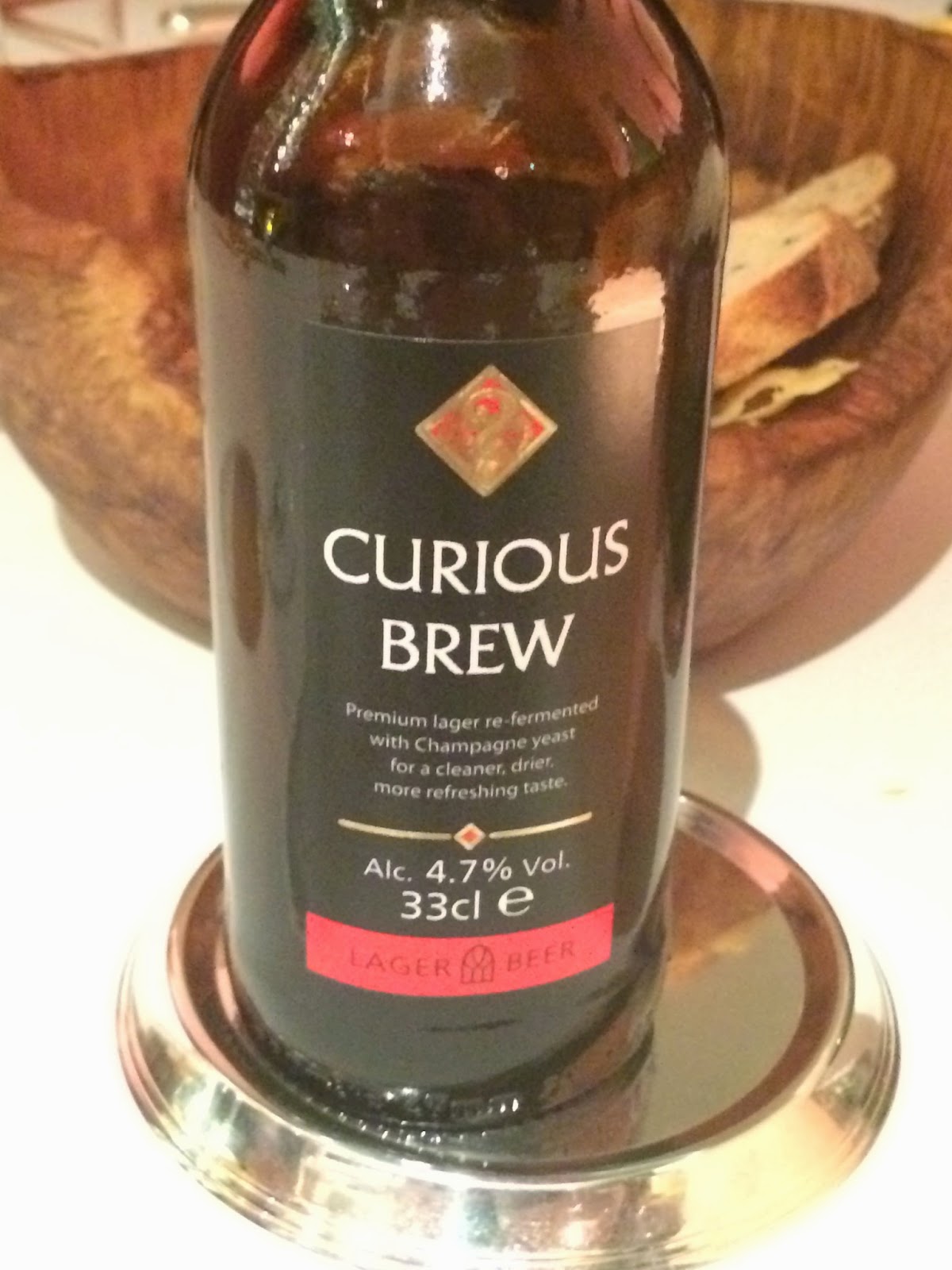 This beer is apparently finished off with some champagne yeast, and this gave it a more refined, interesting finish than your average lager, and it went very well with the fragrant seafood starter.  A good start. 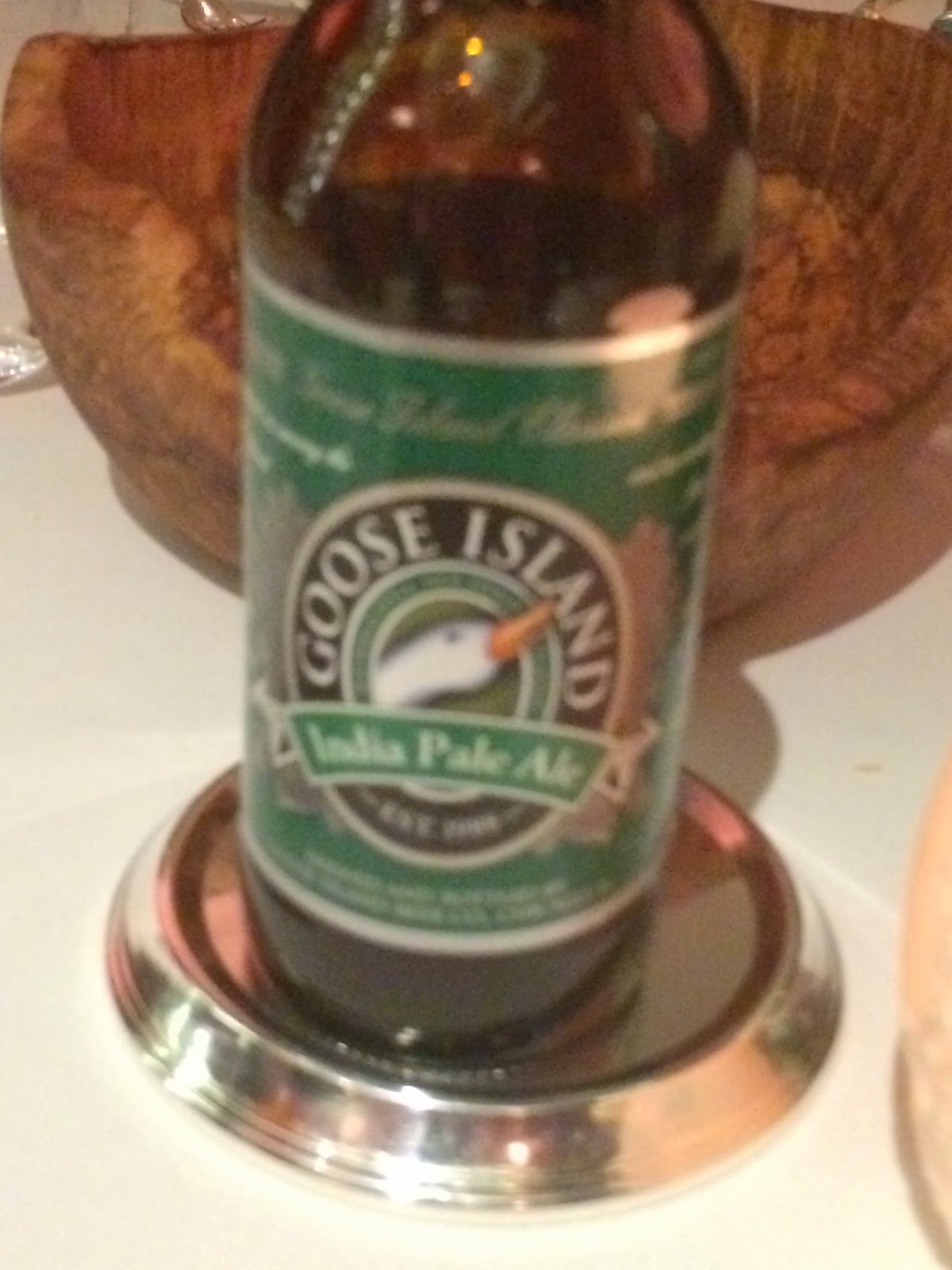 I'm pretty sure I've had this before.  It's a fairly typical new world IPA with bold, hoppy flavours, but it has a lovely spicy nose.  You probably wouldn't think that it would go well with the food, but actually it really does. 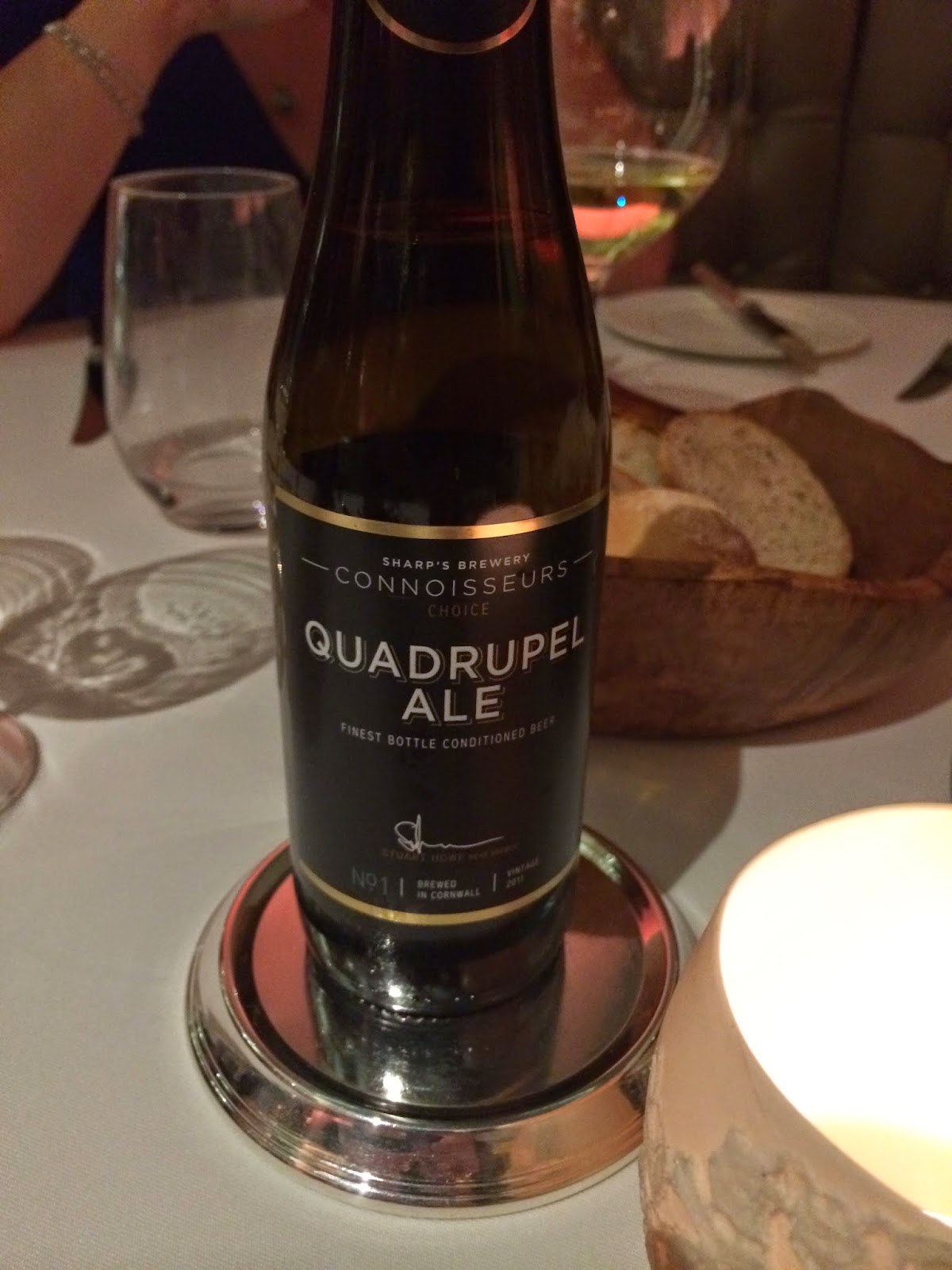 This is brewed by Sharp's Brewery, the same guys who make Doom Bar and who have just been taken over by Coors.  It's a dark, sweet beer that, in my opinion, overwhelms the dish.  It was tasty, but I think too rich in flavour for the food. 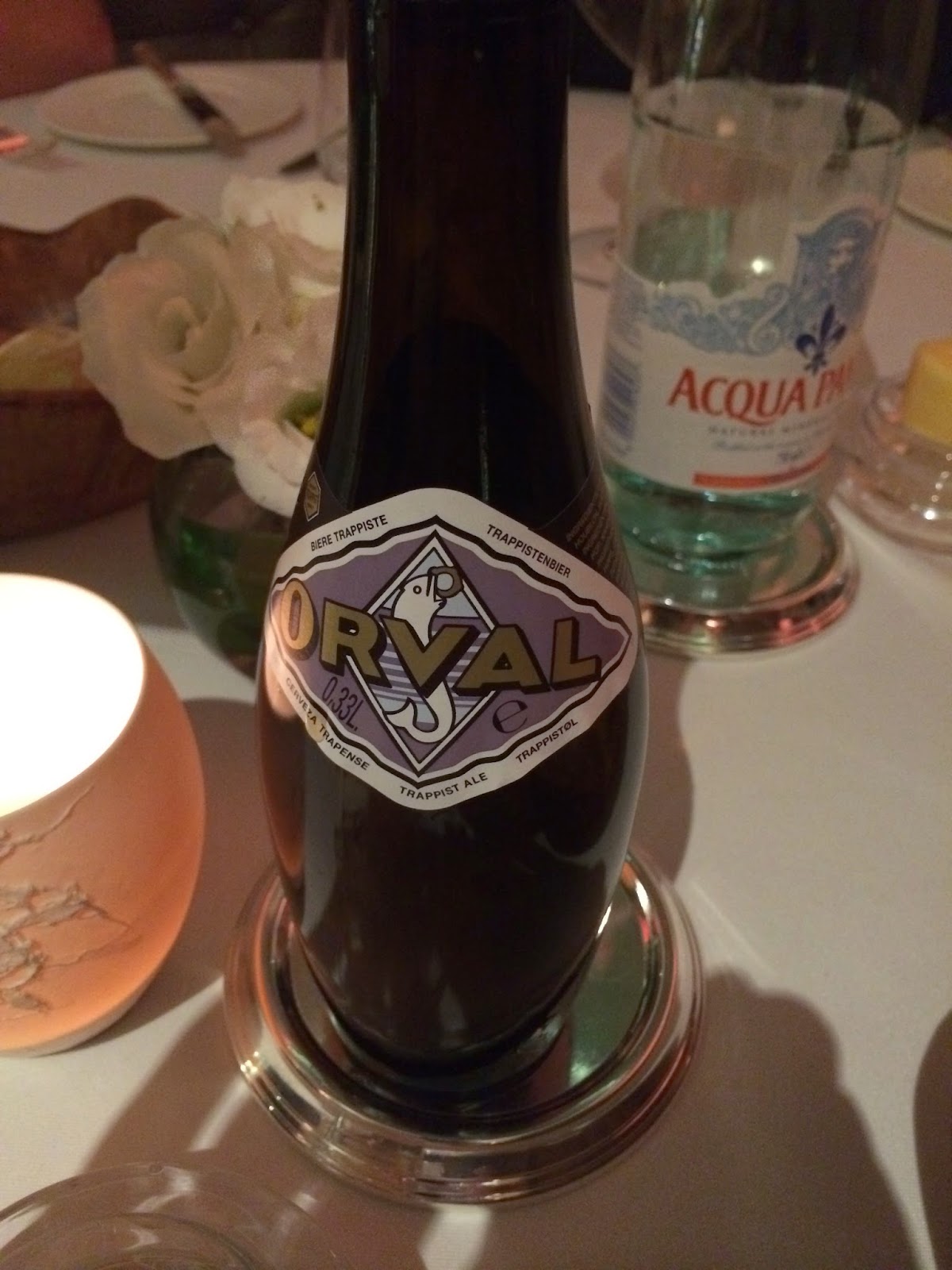 This was a delicious combination, with the beer not being one of those overpoweringly alcoholic Belgian beers, but being robust enough to hold it's own with the meat.  I really enjoyed this one. 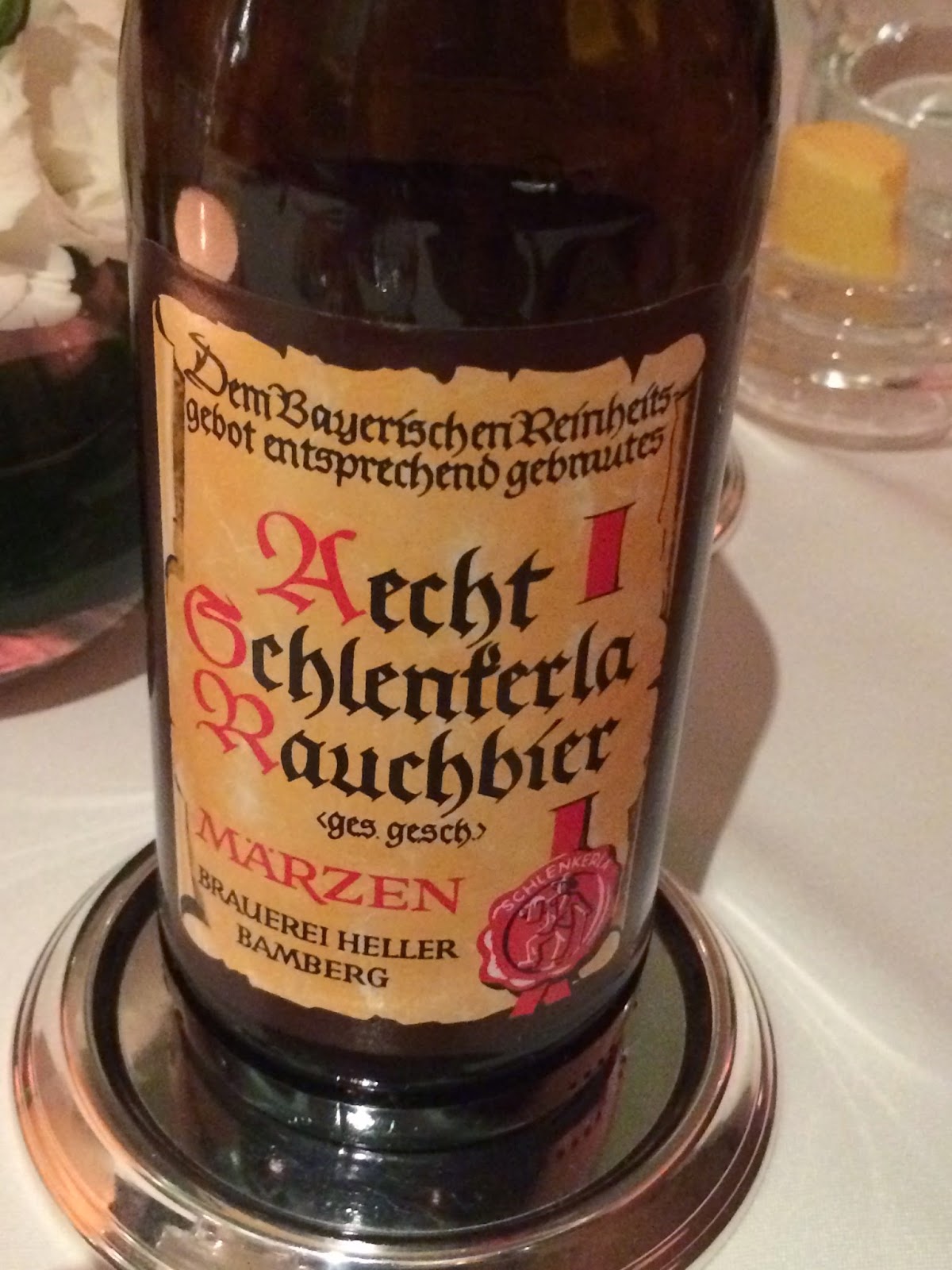 They sell this in the beer shop round the corner from me, so I'm familiar with Bavarian smoke beer.  I generally find these a bit much when served on their own, but it worked well with the lamb.

(at this point I had a very tasty cheese course with a glass of port before the final push for home....) 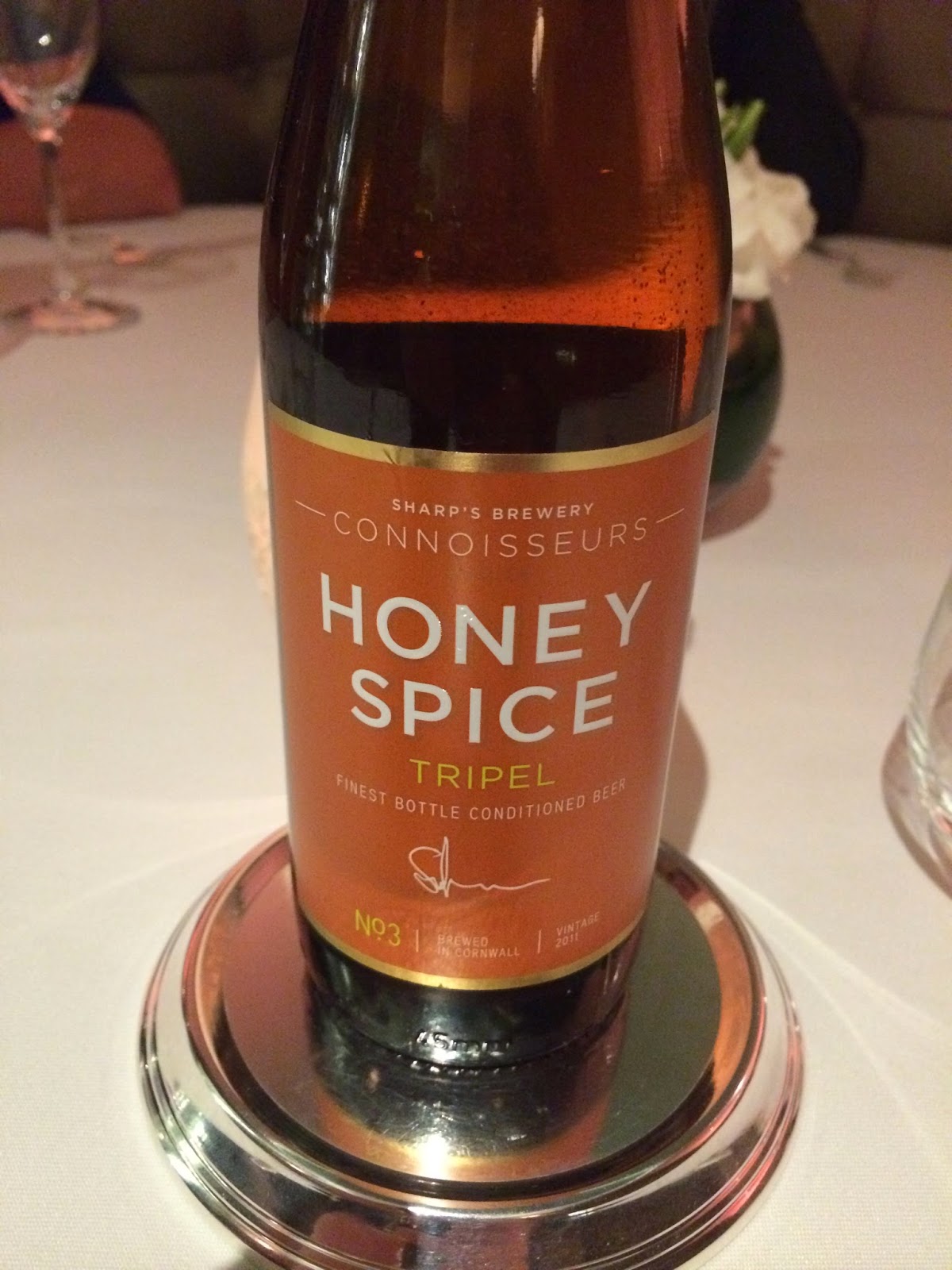 Another one from Sharp's and another winner with the sweet courses.  This apparently has an ABV of 10%, but by this point the other beers have worked their magic and I didn't even notice how strong it was.

So that was it.  Do I think it was a worthwhile exercise?  Absolutely, yes.  Two of us at the table were having the beers with our food, and so the sommelier brought us one bottle for each course to share between us, and that worked out quite well: not too much, but enough to accompany the food.  It was also a bit less of an alcoholic slog than having the wine, which was good (although, in fairness, C isn't much of a drinker, so I also had a crack at a fair bit of her wine...which was excellent).  My favourite was probably the Goose Island IPA, but they were all really good beers and it was interesting to really savour beer with excellent food; a different flavour with each course.

It's not as expensive as you would think either: the taster menu is £65 (and they also have a full vegetarian taster menu too, which my friend Jonny says was excellent).  With matching wine, this is £125, and if you choose to have the prestige wines, it's £190.  Not cheap, for sure, but for Michelin starred food,  I don't think that's too bad and I've paid nearly as much in vastly inferior restaurants in Nottingham (I'm looking at YOU, The Riverbank...).

One gripe: the taster menu with beer was £110.  That means that you're paying £45 for the beer.  In other words, the two of us having beer paid £90 for six bottles of beer.  I know there's a mark up.  Of course there's a mark up!  We've all been served wine in a restaurant that we could have bought in Tescos for a fraction of the price.... you expect a mark up.  But.....but....but..... I picked up some of the Goose Island IPA when I popped into Waitrose in town on Monday, and it was retailing for less than £2 a bottle.  That's a little galling, wouldn't you say?

It was fun, but next time I'm having wine.  For that much money, I think I'd like to have something I can't get round the corner.
Posted by swisslet at 21:45