As that other pompous idiot, Mavolio once remarked, "Be not afraid of greatness. Some are born great, some achieve greatness, and others have greatness thrust upon them".  No matter how much my natural inclination may be to hide my light beneath a bushel, it seems that fate has other plans for me.

A friend emailed me this afternoon suggesting I have a look at the the Guardian Music homepage as it was always nice to see a familiar face.  I did.  I was momentarily alarmed to think that he may have thought he was being funny and saying that I looked like Aphex Twin.

Then I looked a bit closer.  Oh look!  Right in the community bit.... 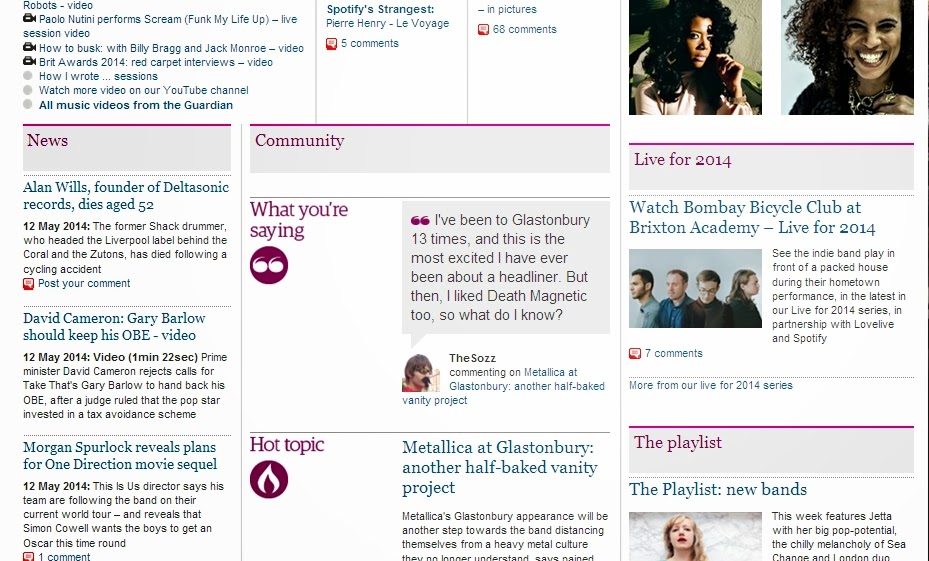 It's a pull out quote from a comment I made on a ridiculous article that the Guardian put up on Friday night just after Metallica had been confirmed as headliners at Glastonbury.  Fairly typically, the Guardian resisted the temptation to publish the obvious article from someone moaning about how Metallica just aren't appropriate as a Glastonbury headliner.  Instead, they put up a piece by a metal snob talking about how it was just another misstep from a band who have no idea what they're doing any more.  It's a ridiculous article, and most of the comments say as much.  All I was trying to do was to say how excited I was by the announcement (the comment about Death Magnetic is referring to a snobby remark the author of the article made about Metallica's last album.  No, it's not Master of Puppets, but then again, neither is it St Anger).  Three days later, and apparently that throwaway comment is worthy of pulling out.  Well, who knows how these things work?

As it happens, I think it's my twelfth Glastonbury, actually.... but that seems like an unimportant detail.

This has happened to me before, of course, a pullout quote on the BBC website after the Queens of the Stone Age gig at Rock City as part of One Live in Nottingham in 2002.  Luckily, I've never been one to let things like this go to my head, and I shall remain the balanced, humble individual that you all know and love.

I leave you with the words of Marcus Aurelius: “Accept the things to which fate binds you, and love the people with whom fate brings you together,but do so with all your heart.”

Oh, I am fortune's fool!