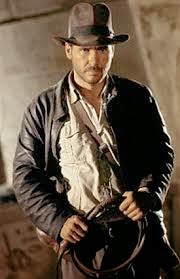 You might remember that I've been on a bit of a mission over the last few months to extend the cinematic horizons of some of my younger colleagues.  This has been somewhat harder than you might imagine as they don't appear to have seen anything at all, never mind any of the real classics.  Still, I like a challenge and have been lending out various DVDs and then asking for a score out of ten to force them to think - even a little bit - about what they really thought about the film.

It's been a bit quiet recently, but one of my other colleagues - 23 years old, ladies and gentlemen - finally returned the copy of "Raiders of the Lost Ark" she borrowed before Christmas (amazingly, she hadn't seen it).

Still, put yourself in her shoes: she hasn't seen Star Wars, Witness, Mosquito Coast, Blade Runner, Working Girl, and she's only just seen one of the Indiana Jones films.... why should I expect her to really know or to understand or care that Harrison Ford is one of the most successful movie stars who ever lived and has been in some of the biggest grossing films ever?  Not to put too fine a point on it, she was born in 1990 and his film record hasn't exactly been unimpeachable since then, has it?  You might wonder about her lack of curiosity or desire to view films from before she was born, but basically, he don't mean shit to her.

Maybe it's a reflection of my age that this seems so inconceivable.  I'm the Star Wars generation.  Ford's golden period coincides neatly with my discovery of films.

Still, what do I know?  My team have just named the whiteboard we gather around each morning "Zac Efron".  Apparently it amuses them.  How quickly they've forgotten their crush on Channing Tatum....

That is an awesome effect though, right? Still beautifully effective to this day!  Zac Efron wishes he could be in a scene as memorable.... and actually, who wouldn't want to him recreate this exact scene?
Posted by swisslet at 20:41